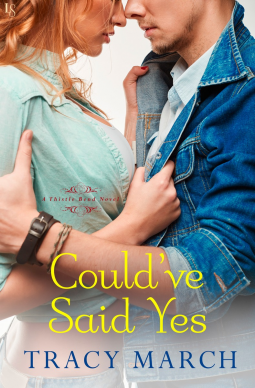 Having recently returned to Thistle Bend, Colorado, Ellie London is working hard to make a living as an artist, and to get over her broken engagement. She’s focused only on guarding her heart and healing her mind . . . until a cocky, undeniably sexy out-of-towner rides in on his motorcycle. Turns out, Ellie might have just found the perfect opportunity to prove to herself that she’s over her cheating fiancé.

After his own engagement falls through, EPA Inspector Collin Cooper is eager for a change of scenery in Thistle Bend. His principle rule of the road is not to get too involved with a new woman—and yet he can’t resist beautiful, outdoorsy Ellie. But when a local river becomes polluted under Collin’s supervision, resentment floods the entire town, running even deeper with Ellie’s family. With his job on the line, Collin needs to find a way to set things right—and hold on to the woman who has captured his heart.

It’s always a bittersweet moment when a series comes to its natural conclusion and we have to say farewell to old friends.  And no matter how many times I’ve written that statement, it is true every single time, as I invest in series, I connect with people and often times they become really good book friends.  I know you know what I mean.  *chuckles*

Broken relationships are tough.  When you’re coming out of one you vow never, ever to fall into that mess again.  But what if the absolutely perfect for you person crosses your path?  Are you willing to take another chance?  That’s the challenge that Ellie and Collin faced.

I really enjoyed this final couple in the Thistle Bend series.  They both were burned badly in previous relationships, but the attraction is strong enough for some flirty chances to be taken.  Just as things are moving smoothly, disaster strikes in more way than one.  Sometimes when you’re scared to trust your own judgement again after making such a horrible mistake… well, you do stupid things..  Which is exactly what Collin did.  He got scared and did something dumb.  Now he has to make up for that, yes, groveling will be required.

The disaster at the local river is huge and it sets forth a lot of resentment and anger on the part of the townsfolk.  Understandably.  Yet, somehow Collin has to fix this mess without losing something even more precious than his job… Ellie.

At times lighthearted and flirty, at others serious and intense – what Could’ve Said Yes is most of all would be an entertaining romance between two broken people, in the middle of a small town crisis.  All of those parts come together to give us a romance that sends our book friends off on a very high note.  I enjoyed this one so  much, and I believe you will too.