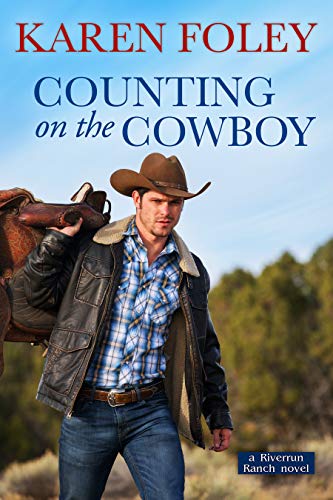 It will take all he has to keep her safe

Luke Claiborne is back in Last Stand, Texas, after a combat injury ends his career as a military K9 handler. Without his working dog by his side, he’s lost his purpose – until he meets a sexy wildlife rehabber who seems determined to save every animal in town. When she puts her own life at risk in the process, it’s clear to Luke that she’s the one who needs rescuing. Before long, his new mission is to show her how perfect they could be together.

Jorie Russell has loved Luke since she was an awkward teenager, but she knows he’s out of her league. She grew up on the wrong side of town and has spent her whole life trying to prove she’s not like her reckless, irresponsible mother. Luke might act tough, but she can see he is suffering and she’s determined to help him heal. But then a shadow from her past threatens their future.

Can she finally get the happily-ever-after she’s always longed for?

Counting on the Cowboy is the second title in the Riverrun Ranch series – and while its story is self-contained and complete I’d still recommend reading the entire series (if you can) for not only the sense of continuing with friends but Swipe Right for a Cowboy is another excellent story involving this tight-knit family.

Not every war injury is visible, that is certainly true for Luke who lost hearing in one ear during a blast.  His injury has ended his military career and now Luke is back home picking up the pieces of his life – and missing his K-9 partner who he had to leave behind.  He’s about to get an unexpected reminder of how time passes when, as a volunteer fireman, he encounters a female trying to enter a burning warehouse to rescue a feral cat and her kittens.  He may not recognize Jorie at first, but he does recall her being around with his sister at the ranch.  With a bit of an age gap, and certainly different life experiences he’s noticing the caring woman Jorie has grown into.  She does have a way with critters, great, small, wild, tame… and it seems she just may have a way with his wounded soul as well.

Jorie has a love of animals, and the determination to live down the girl from “the wrong side of the tracks” reputation that her irresponsible mother gained for them.  In reality, no one (of importance) thinks that way about Jorie, they take her at face value as she is.  But she has that image in her mind (and one stalker to reinforce it) so she’s always trying to show her ‘good’ qualities.  Jorie has friends, more than she sometimes realizes who would never think badly of her for where she lived or the actions of her mother.  Now she’s created her own wildlife preserve at home while working as a vet tech.  She’s always had a crush on Luke, and now she starting to think there just might be a future – when her past makes an ugly reappearance.

I adored Jorie and Luke together and individually.  As Luke tries to hide his injury from his family Jorie steps in with some healing of her own.  Watching this couple rediscover each other was such fun.  There is a bit of suspense and mystery as it seems that Jorie is being targeted by a stalker.  If you love a really good romance, a family that feels like – well – family right away, and a couple who just fits right together then you’d enjoy Counting on the Cowboy.  I’m already anticipating the next story in the series.