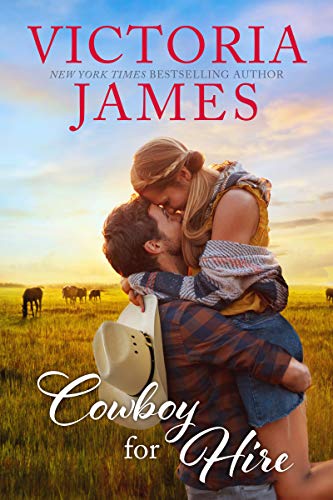 I was so glad to discover that Cowboy for Hire continues the Wishing River series for when I’d read The Trouble with Cowboys last year it wasn’t clear that there would be a series forthcoming – it felt like the beginning of a series, but nothing official at that time.  Now I’ll (hopefully) get the stories of other characters I first met last year and really wanted to get to know better.

I saw both Cade and Sarah as wounded souls for far, far different reasons.  While Sarah comes off at times as overly needy, and definitely socially awkward we’re reminded of her childhood, dysfunctional in the sense that after her brother’s death when she was a young child her parents immediately wrapped her in a safe cocoon (as sometimes in that situation parents will do) keeping her at home with no contact with the outside world for the most part aside from their housekeeper – who I often wanted to “Gibbs Slap” for her actions and words.  Now, after her parent’s deaths Sarah must take over the family ranch, make it profitable but she has no clue how to do that.  Sheltered is a very mild word to describe this woman – that’s where Cade comes into the picture.

Cade has major trust issues, and they are well earned.  He’s accustomed to keeping people at bay, even pushing them away to avoid being hurt for his entire life he has been seen as “not good enough”.  As he answers Sarah’s ad to hire a cowboy he had no clue what he was stepping into – and no idea that this shy, awkward woman was the answer to finally seeing himself as more than good enough to love.  I adored them both, and they both frustrated me as well.  Watching them get past walls, begin to trust, be drawn into a circle of friends, and learn that it’s safe to fall in love was an emotional, enjoyable journey.  If you enjoy a romance where two people who don’t fit in the outside world very well but come alive with each other, a struggling ranch blooming under competent, tender loving care, and a circle of friends that anyone would be proud to call theirs – then you’ll love Cowboy for Hire.  I had a blast, and I already want more.

*I received an e-ARC of this novel from Entangled Publishing via NetGalley. That does not change what I think of this story. It is my choice to leave a review giving my personal opinion about this book.*

Available in paperback or e-reader (mine is the Kindle)