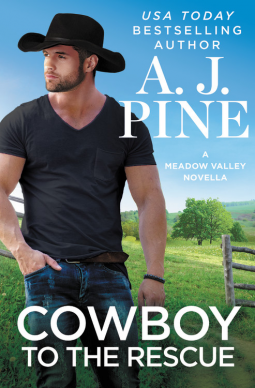 All designer Ivy Serrano wants is a fresh start. But instead, her Meadow Valley homecoming includes an electrical fire, a trashed custom dress, and a very handsome fireman who knows how to push all her buttons. Lieutenant Carter Bowen may set off sparks of his own, but the last thing Ivy needs now is town gossip . . . or to risk loving another firefighter.

New to small-town living, Carter is determined to prove himself, both at the station and at the fledgling dude ranch where he volunteers. That means no mistakes, no distractions, and definitely no Ivy. Yet there’s something about the sassy shop owner that he just can’t resist. As things heat up between them, Carter’s more certain than ever that she’s the one. But can he convince her they have a future worth fighting for?

Titles in the Meadow Valley series include — Cowboy to the Rescue (prequel) – My One and Only Cowboy (Dec. 2019) –

COWBOY TO THE RESCUE gives us a peek into the beginning of the Meadow Valley series with the first book being released in December of 2019.  I love prequels, they give me just enough to decide if I want to continue on with the full series, and often introduce me to the secondary characters who may be playing a part in the series at some point.  It’s a novella-length story and this one will have you waiting for the rest of the series to begin.

Ivy and Carter first meet after Ivy’s put out a small electrical fire, on her own, no professional help needed – thank you very much.  But as the new guy at the station and in town Carter goes by the book in checking out the now former fire scene.  Sparks of a totally different kind sizzle between Ivy and this handsome firefighter – but she’s going to do her best to ignore them.  She’s not looking for a man who walks into danger when everyone else runs the other way.  She lost her brother, a firefighter, to a fire and she will not risk her heart again.  Trouble is, the brain will do its best to protect us, but that emotional heart is wanting what might be the best thing for Ivy, which is to love a good man who loves her back unconditionally.

I enjoyed the introduction to this small town with its quirky residents, dude ranch (where Carter volunteers) and people who will most likely play a large part in the upcoming series.  I was hooked by COWBOY TO THE RESCUE and a love story that touched my heart – now I want to know more, and there’s not that long to wait.

If you enjoy a good romance, some emotional conflict, small-town romances, definitely cowboys and a love story that will engage your emotions then you’ll want to get an early start on the Meadow Valley series with the prequel, COWBOY TO THE RESCUE.  I had a blast with Ivy and Carter, and I believe you will, too.