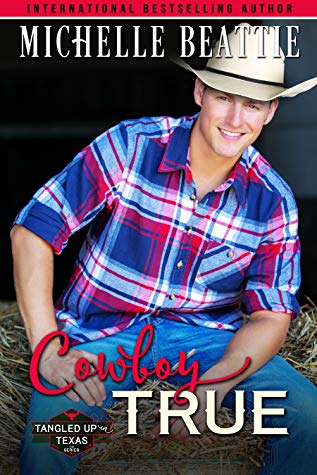 She’s back in his life… and this time he’s not letting go.

Gage Granger knew back in high school that his friend and his secret crush was desperate to get out of Last Stand, Texas. But with his roots running deep into the Hill Country soil of his family’s ranch, he couldn’t leave and so made the tough decision to let her go.

When Faith Stone runs into Gage in a San Antonio bar, she’s had just enough to drink to act on feelings that haven’t cooled in six years. And enough sense to flee the morning after. Yet almost twelve weeks later she’s back in her hometown and despite her life-altering news, her plan’s the same—leave Last Stand and its painful memories behind. Faith will never be anyone’s burden or responsibility again.

For Gage, Faith has always been the one. But he’ll have an uphill battle to convince her his heart is true.

Cowboy True is the second story in the Tangled Up in Texas series, also part of the Last Stand, Texas line.  We’ve met the Granger brothers in their first story, Cowboy Up and they all have a lot to deal with, come to terms with and move on from – and that will also include the ladies in their lives who add complications as well.

When Faith and Gage run into each other at a bar it’s obvious that neither has gotten past high school secret crushes for their feelings are strong enough to end up in a one night stand that Gage thought would be the start of something… it wasn’t, then, at least.  Now several weeks later Faith is back in town with news for Gage and a decision already made.  It’s up to Gage to get past her defenses, show her that life together in Last Stand is worth fighting for and to convince her that her past is right where it should be – in the past, the future lies ahead with him.  It’s not going to be easy to win that argument by any definition.  Faith will never, ever again allow herself to be seen as or to feel like a burden on someone she cares about.  It’s now up to Gage to show her that loving someone is no burden at all.

I’ll admit that it took me a while to warm up to Faith.  I could definitely understand her viewpoint, yet it took seeing Gage’s reactions to her and her news before I finally could say that I liked her.  Now, Gage, I adored this straight-talking cowboy from the start.  As Faith and Gage work out their relationship we’ll run into known faces, get a little further in the overall feel of this series and maybe get a hint of the next brother to fall.  I enjoyed Cowboy True, there’s chemistry, humor, angst, regrets, and hope for the future mixed up with two people going beyond that crush into full-blown lifetime lasting love.  If you love a solid romance with believable, relatable characters then you’ll enjoy this story and series.