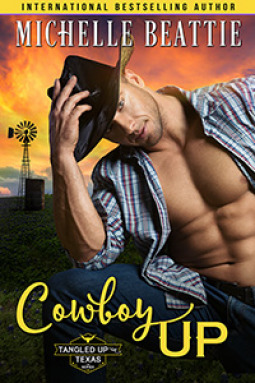 COWBOY UP begins Michelle Beattie’s Tangled Up in Texas series, one of the many individual series set in Last Stand Texas.  It’s also her step into the Contemporary Romance genre, and as I’ve loved her Historical Romances (especially those about early Marietta, Montana) finding COWBOY UP was a particular delight for me.

If there was ever a character I almost immediately wanted to give a smack upside the head Gibbs style, give a very stern talking to and a comforting hug in one fell swoop it was Dallas.  Man does this guy have trust issues.  And assumptions out the kazoo.  And we all know what is said about “assume”, yeah, it did that, too.  I understood why, for the most part, but I was certainly waiting for him to grow up and take control of his attitude that had no place in this situation at all.

Ashley hasn’t been handed an easy life.  Yet she does not let that stop her from doing her best for her daughter, juggling several jobs, barely keeping it together and find time to work on the house that she hopes will soon be their new home.  Her first impression of Dallas was – awkward.  Handsome as sin on a stick with attitude beyond belief.  How could she possibly be attracted to this jerk?

COWBOY UP kept me on my toes as both Ashley and Dallas have serious issues that need to be dealt with before they find their happy ending.  Dallas will show his true colors, his heart, in his actions.  It will be up to Ashley to believe in them, and in him.

You’ll find some interesting secondary characters around Last Stand, Texas.  Brothers who also have their own tales to be told and issues to come to terms with eventually.  This is a good beginning to a series that already has me fascinated and wanting more.  I’d recommend Dallas and Ashley’s story to any reader who loves second chances, a change of attitude, and a couple to hope for their happy future.