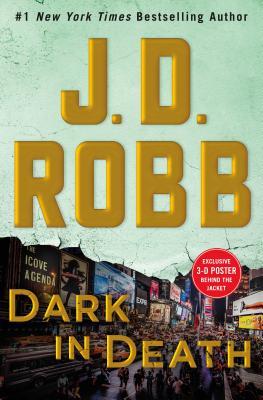 It was a stab in the dark.

On a chilly February night, during a screening of Psycho in midtown, someone sunk an ice pick into the back of Chanel Rylan’s neck, then disappeared quietly into the crowds of drunks and tourists in Times Square. To Chanel’s best friend, who had just slipped out of the theater for a moment to take a call, it felt as unreal as the ancient black-and-white movie up on the screen. But Chanel’s blood ran red, and her death was anything but fictional.

Then, as Eve Dallas puzzles over a homicide that seems carefully planned and yet oddly personal, she receives a tip from an unexpected source: an author of police thrillers who recognizes the crime—from the pages of her own book. Dallas doesn’t think it’s coincidence, since a recent strangulation of a sex worker resembles a scene from her writing as well. Cops look for patterns of behavior: similar weapons, similar MOs. But this killer seems to find inspiration in someone else’s imagination, and if the theory holds, this may be only the second of a long-running series.

The good news is that Eve and her billionaire husband Roarke have an excuse to curl up in front of the fireplace with their cat, Galahad, reading mystery stories for research. The bad news is that time is running out before the next victim plays an unwitting role in a murderer’s deranged private drama—and only Eve can put a stop to a creative impulse gone horribly, destructively wrong.

Dark in Death is the 46th book in the in Death series.  For a complete list of titles in this series please visit the J.D. Robb page.

It is so easy to slip back into the world of Eve and Roarke.  Effortless, like sitting down for a visit with old friends, and Dark in Death is no exception to that well established rule.  Although it’s become my habit to read the next in Death book on publication day, I’d pre-ordered this one to dive straight into as the premise behind it caught my imagination from the first time I’d read the description a few months back.  A writer of police procedural, murder mysteries discovers that her books, or a specific murder from several of her books, is being carried out in real life with chilling efficiency.  The parallel was fascinating to me and I anticipated Dark in Death hitting publication day.  This one will turn out to be one of my favorites of the series.

Going into any great details would be stealing the enjoyment of discovering this case for yourself, but it certainly sent some chills up my spine.  There is crazy, then there is bat-crap crazy mixed in with cunning and those make the best cases for Eve and company to solve.

Part of the charm, the draw of the in Death world for me is seeing the characters grow and evolve over time.  We’ll get a glimpse, or mention, of almost everyone at some point in Dark in Death and that is always a special enjoyment for me.  I enjoyed this story, it kept me reading long after I should have been asleep and kept my attention riveted throughout the story.  You’ll find no spoilers here for like all in Death stories, it’s up to you to do your own sleuthing along with Eve, Peabody, Roarke and company.  But you will find a story to capture your attention, give you a few chuckles, a few tense moments, introduce you to some seriously crazy people and see justice done in the end.  And in about a week I’ll go back and give this story a second read to pick up those nuances I probably missed in my desperate need to catch a killer – and I’ll probably enjoy it just a touch more, as usual.

Excellent read, tight story, chilling killer, amazing secondary characters who all have their moments to shine.  I’d recommend Dark in Death, and the entire series, to any reader who enjoys thrillers, mysteries and putting together the puzzle pieces.  Plus, it’s hard to not love Roarke and his Eve.

I own a Kindle Copy of this book.