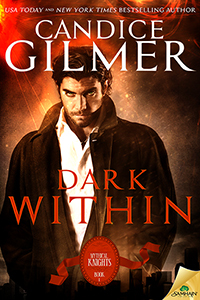 Marissa’s life changed the night her family was killed.  Halloween night.  To some extent it ended at that moment for the survivor’s guilt has stopped time for Marissa.  Her circle of friends is closing, she rarely goes out of the safety of her home, only to work and the book club her mother had belonged to.  Evenings out with friends are rare.  Which is why it was odd for her to be out with friends this night, unusual that she would stay behind to comfort an acquaintance as she cleaned up the bar before closing.

The attack came suddenly.  One moment she was walking to her car, the next she was on the ground and trying to avoid her attacker.  She was vaguely aware of a wolf who came to fight off her attacker, and she watched that monster fly off into the night sky while the wolf stayed beside her keeping her safe and warm.

Neil should have been safely locked up at his family’s compound this night of the full moon.  It was a precaution he and his brothers took so that the power of the full moon would not overtake their own common sense.  Werewolves were not known for logic during that particular phase of the moon.  Yet here he was, racing across the parking lot tackling this monster who dared to lay his hands on this woman… a woman who smelled of floral perfume.  He didn’t understand why, but this woman was special to him and no one would harm her.

Dark Within brings us Neil and Marissa’s story.  As the second oldest son, Neil is considered a playboy, a man who will never settle down.  For Neil it’s more a fear of letting go of his control and a conviction that there is no special woman out there somewhere for him alone.  Marissa is a wounded soul.  Her friendship with Kelsey has gone through some changes since her marriage to David.  They no longer had the time to spend endless evenings together and of course there was the not really trusting or believing in their whirlwind courtship and marriage.  Yet it is to Kelsey that Marissa turns for help which brings her into closer contact with Neil.

There is an underlying sense of urgency, of battle lines being drawn and an army collected – from the enemy’s side.  Right now the mystical beasts of town really don’t yet know the full extent of the danger they will be in.  Neil will continue his pursuit of Marissa – and she will continue to hold on to her memories of the past.  Until one night changed everything for them.  And they both must decide what their future holds.

I enjoyed the second journey into the Mystical Knights series very much.  We are getting more details of the lore and lives of the Drigan pack as well as more glimpses of the evil that is gathering.  Marissa’s past must be faced before she can more forward, and Neil will wait a lifetime if he must for her to come to him freely and without fear.

If you love Paranormal Romance, especially shifter series, then Dark Within is an intriguing, compelling, and charming story to sink your reading teeth into.

*I received an e-ARC of Dark Within from the publisher and NetGalley in exchange for an honest review. That does not change what I think of this novel.*