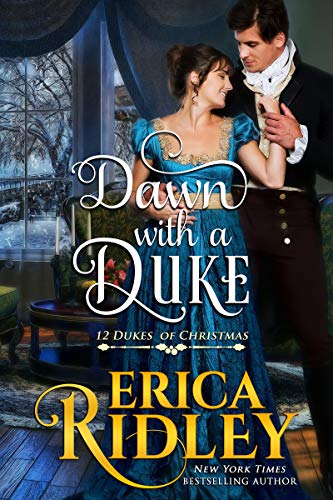 ‘Dawn with a Duke‘ is the ninth story in the ‘12 Dukes of Christmas‘ series.  Although I’ve purchased the previous titles (in a binge-buying spree), frankly time got away from me before I could read them prior to this release.  So, it’s a good thing these are Christmas themed stories for I can get caught up easily over the next few weeks.  It’s also a good indicator to me (one who tries to read series in order) that this title could be read and completely enjoyed on its own, which makes me believe the earlier ones could be read that way as well.

Most of what you’d want to know before picking up this title can be found in the Cover Description.  What can’t be felt there is the utter rightness of these two people being together, slowly falling in love in spite of their differences, or finding a way to make sure that love lasts a lifetime – no matter what life or society tossed their way.  I liked Belle and Calvin so much.  Yes, there is a feel of steamy chemistry between them, yet there is also the feeling of a slow burn, a getting to know each other through those quiet moments, a sense that they are exactly what the other needs in their lives.

I had an excellent time in this world, which only makes me want to start a binge-reading of the earlier titles immediately.  If you love a really good romance with believable people in unusual circumstances then you’ll want to pick up ‘Dawn with a Duke‘ right now.

« The Haunting on Palm Court by Stephanie Edwards
Once Hunted, Twice Shy by Mandy M. Roth »