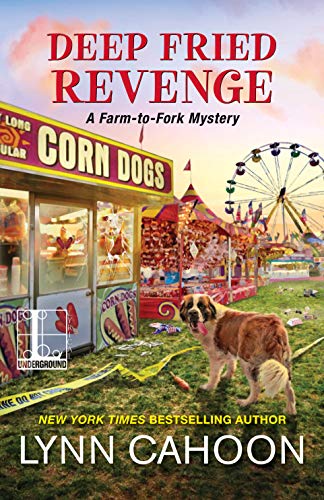 Even though I came in late to this particular series with the recent holiday novella, I’m absolutely loving the Farm-to-Fork Mystery series.  The characters are realistic, the mysteries well, they certainly “could” happen, and the supporting cast is already a favorite of mine.  Deep Fried Revenge simply cemented my continuing this series with a well planned out, believable Cozy Mystery that kept my attention glued to my Kindle.

At the Idaho State Fair, Angie and crew are set to enter into the Boise’s Best Restaurant contest which plays out like a TV reality cooking show with deep-seated rivalries in a contest that everyone is desperate to win.  So much so that one top contender ends up dead by poison and not only is Angie right in the investigation’s crosshairs but she’s determined to discover exactly who committed this crime because she’s not leaving her freedom up to anyone else but herself and her crew.  What follows is a fast-paced search for a killer, an interesting secondary plotline, and so much carnival food that it brought back memories of my own childhood when my parents and I followed our state’s carnival circuit every summer.  I was easily swept up in this Cozy Mystery and didn’t even try to solve it along the way – I was having too much fun for that detail.

If you love a really good Cozy Mystery of the foodie style, then you’ll want to pick up Deep Fried Revenge right now and dive into the craziness of the state fair meets a murderer.  I  had a blast and would definitely recommend.

Available in paperback, audio, and e-reader (mine is the Kindle)