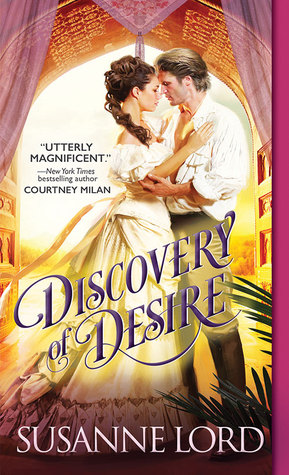 AN EXPLORER LOST…
To the East India Company, he’s the ideal explorer: unwed, uncomplaining, strong as an ox and profitable. There’s nothing Seth Mayhew can’t find—until his sister disappears en route to India. The expedition is the first he fears he may fail, until he discovers a valuable, and irresistible, ally sailing on the same ship to Bombay.

A LADY FOUND…
But Wilhelmina Adams is on an expedition of her own—for a husband. With six sisters, no dowry and no marriage prospects in her Derbyshire village, Bombay promises a husband and security. But assisting a dangerously distracting explorer won’t improve her prospects.

A LOVE DISCOVERED…
It’s an inevitable partnership, but the winds of fate are ever changing. Adventures that begin in the bazaars of Bombay can diverge to the slums of London and patchwork fields of England. And at each port of call, Seth and Mina will have to risk everything to unearth the heart’s greatest prize.

Titles in this series include:  In Search of Scandal, Discovery of Desire

Read on for my thoughts on Discovery of Desire.  No true spoilers, promise.

In Susanne Lord’s second novel in the London Explorers series we’ll meet two people who really should not be falling in love.  They each have other things that must be done but love is never logical or at times… convenient.

Seth is in India searching for his missing sister.  He has some help in the form of a guide, Tom Grant but Tom isn’t as helpful as he should be.

Mina, along with her sister, Emma have traveled to India to make contractual marriages.  While they have been in written contact with the men, they’ve never met face to face.  At this point in history, it was rather common for women to travel to other countries under England’s flag in search of marriage.  For some it was their only hope for a better life.

Mina is willing to take Tom, even though she definitely has feelings for Seth – he’s not the marrying kind and she needs the security that Tom offers, even if Tom no longer seems too excited about their marriage.  When Emma’s intended, Colin, does not meet her and is in fact late in returning from a trip – the action begins to heat up.

Discovery of Desire is delightfully intriguing and full of historical facts that both amuse and startle.  There are mysteries aplenty and a slightly forbidden attraction soon becomes so much more.  And the groundwork for what is most likely the next couple to be focused on is laid out for us.  I completely enjoyed my time spent in this novel and am definitely looking forward to the next.

I was impressed by Ms London’s debut novel, In Search of Scandal, the first story in this series.  I am equally impressed that her style and her way with words have continued on into the next story.  I believe those of us who love Historical Romance are going to become quite familiar with this author in the coming years – if this is the quality of story, characters and plot that she is delivering at the start of her writing career – I cannot wait to see what comes next.

If you love a good mystery, a delightful romance and interesting historical facts – then you’ll love Discovery of Desire.  It’s certainly a satisfying read that brings history alive and delivers a charming couple who simply have to have been made for each other.  There’s just a few issues that need resolved to get to their happy ending.  Indulge and enjoy.

*I received an e-ARC of Discovery of Desire from the publisher, Sourcebooks Casablanca and NetGalley in exchange for an honest review. That does not change what I think of this novel.*