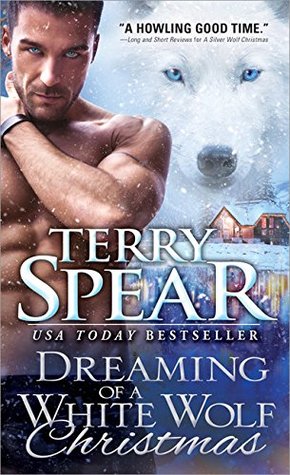 May all your Christmas wolves be bright…

Romance writer Candice Mayfair never missed a deadline in her life–until the playful bite of a werewolf puppy accidentally turns her into an Arctic wolf shifter. Talk about a life-changing event! Candice is at the end of her rope with the unpredictable shifting, a strong desire to howl, and the need to vacuum constantly to keep the shedding fur under control.

Enter werewolf private investigator Owen Nottingham. Owen has a new mission: convince the pretty she-wolf she needs to join his pack in time for Christmas…and be his mate. It’s the only way he can think of to keep her safe…

If you read last year’s holiday story A Very Jaguar Christmas with Demetria and Everett’s adventure with a white wolf pup, a shifter species that none of the jaguars knew even existed – well, then you’ve met Corey, and know the mischief he can get up to.

A few years ago, Clara was with a small group of friends, camping in the forest.  Unable to sleep she went outside of her tent to watch the stars.  She caught sight of a white puppy and thinking the pup was lost she’d held out a bit of beef jerky to tempt the puppy closer – unfortunately instead of being able to grab the pup she ended up lightly bitten as he snatched the jerky out of her hand and ran.  It hurt, and she felt a bit odd.  Returning to her tent she discovered at some point during the night she’d suddenly grown paws… white furry paws.  Believing it to be a hallucination from the dog bite she shrugged it off… until it happened again.  Yeah, that was no lost puppy but a small white wolf shifter named Corey… in trouble once again since it’s now come to light that he’d accidentally turned a human.

These days Clara, who has officially changed her name to her professional pen name of Candice Mayfair lives a very solitary life in a small town near mountains and forests where she can run in her wolf form.  She has no control over her shifts and has left friends, family and career far behind.  Only visiting when the moon phases allow, which has created conflict, disappointment and her adoptive parents basically disowning her.  She lives alone, writes her hugely popular paranormal romance and survives.  Alone until one special man searches her out… one man she never imagined would have such an impact on her life.  Her mate.

Owen, along with his friends and pack mates have opened up the physical office for their private investigator business.  And the very first call is an interesting missing person case.  A young woman disowned by her parents has fallen off the planet it seems.  She’s come into quite an inheritance from her parents and she has one month to claim it or it goes to her uncle.  Yep. Candice.  Owen sets out to find the elusive Clara and discovers far more than he thought possible.  Now he has to convince her that claiming her inheritance and going to meet with his pack are really good ideas… perhaps proven when they are followed by a stranger tracking wolf prints that lead right to her door.  Owen’s attraction is strong, he believes he’s found his mate but he won’t push her.  Yet he hopes that showing her the safety and community of pack life and helping her with her inheritance claim will show her just how right they are together.

Dreaming of a White Wolf Christmas is a fun, sexy, emotional story with touches of intrigue and danger.  It’s stated as the first book in the White Wolf sub-series, a part of the Heart of the Wolf series… yet if we’re talking about the white arctic wolves then Legend of the White Wolf would be the first time we met any of Owen’s pack mates, in particular Cameron and Faith.  Just a side bit of information there.

I enjoyed Candice and Owen’s romance very much.  They are a believable and likable couple who fit together so well.  It was fun to run into other characters from the overall series and the jaguars series once again.  I happen to love when those light crossovers happen in Terry Spear’s stories.  I believe any Shifter Romance or Paranormal Romance reader would enjoy this one.  Do you “have” to have read the entire sets of series?  That’s a hard question.  On the surface… no, you can enjoy Dreaming of a White Wolf Christmas as the start of a new series.  There isn’t the world building of the original series, yet there is enough background information added in that I don’t believe you’d be lost.  It might even encourage you to go back and read the earlier books.  In my opinion.