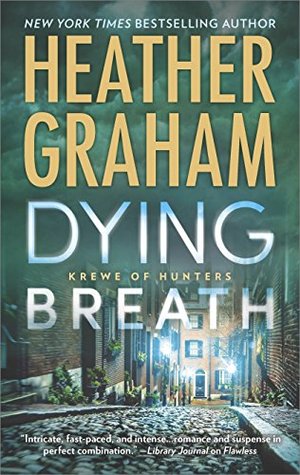 It’s true that some of us do see dead people.  Or ghosts as these spirits of the once living are more often referred to.  Not everyone who can see them really wants to, but the choice is really not up to us but to the ghosts who have something to say.  Vickie learned this fact the hard way when the deceased brother of the toddler she was babysitting made his presence known during a frightening, almost deadly event.  She and baby Noah had survived a serial killer’s intent by listening to a ghost and the chance passing by of a Boston city cop.  Dylan became a companion of sorts from that day onward even though Vickie left Boston for college for a few years.  It became simply something she did, this talking to the nonliving.  She never expected that it would lead her into more terror or that because of it she would once again come in contact with a former Boston cop who now sought out dead people for the stories they could tell, for the justice they deserved.

Dying Breath is intense.  There simply is no other word for the feeling that overpowers the reader.  Suspense, a puzzle to solve. a love beginning, and saving lives before madness can complete its mission… all those emotions can be found here as well.  I’ve followed the Krewe of Hunters series for years, and I have to say that this story gripped me from the very beginning and never let go.  If you love history, there is a lot of Boston’s famous, and infamous, past woven throughout this story as clues, and gathering information to find the stolen before they take their last dying breath.  I found the history almost as fascinating as the search for the killer.  There are twists and turns that you won’t see coming, there are moments that you’ll hold your own breath as a scene unfolds.  But mostly you’ll be caught up in the search to save lives and bring this madness to a stop.  I did not see the end coming, and it was right in front of me all the time.  That is Heather Graham once again weaving her own brand of magic to give us a chilling, intriguing, fascinating story.

It would be so easy to talk about Vickie and Griffin, but I believe it’s best if you meet then and discover their story for yourself.  You don’t “have” to have read the entire Krewe of Hunters series to enjoy Dying Breath.  Anything you might need to know as background is expertly woven into dialogue… but I would highly recommend this story and the entire series, for they are all that good.

I own an e-book edition of this novel.