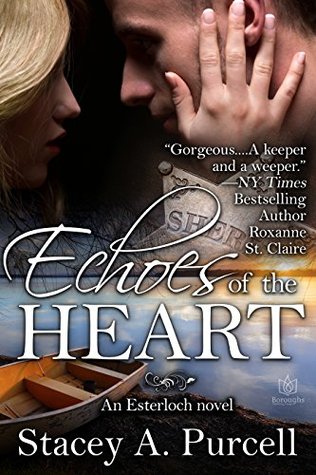 Stuck in upstate New York to work off a humiliating arrest, Dr. Calista Montgomery is forced to deal with the disdain of arrogant sheriff Jack Benfield—and their undeniable attraction.

For Dr. Calista Montgomery, losing her soldier husband was like diving into a cold dark sea, and the events at his funeral swept her farther from shore. Crushed by the lies, Cali crawls into a bottle and flees all she knows. Inebriated and drifting aimlessly, she winds up in Esterloch, New York, where she’s arrested and hits bottom. Offered a chance to expunge her record, she accepts the conditions…but the real challenge is keeping herself safe from the arrogant, gorgeous and commanding sheriff.

FOR THE LAST TIME

Sheriff Jack Benfield hates drunks. They’re selfish, manipulative, and they break hearts, and his is no exception. He saw the damage inflicted upon his family, so he has no patience for any of them, not even the beautiful Dr. Montgomery. His body, however, has different ideas, and soon two desperate souls will discover that some breaks make us stronger—and sometimes we must drown before we learn how to breathe.

Read on for my thoughts on Echoes of the Heart.  No true spoilers, promise.

It’s often been said that once you hit rock bottom there’s nowhere left to go but up – that’s not necessarily true.  You can hit rock bottom and tunnel a bit further down if you’re determined enough or simply do not care about anything anymore.

Cali thought her world ended when her husband died.  Actually the web of lies that was revealed at his funeral totally crushed her world – and all she wanted from that point onward was escape.  Her escape route was the bottle, and it took her on a spiraling journey into darkness, depression and pain.  She lost everything she once valued, her husband, her marriage and her profession.  All lost.  And the truth is she simply no longer cares.  Cali is about to get a wake up call.

Jack is a man in a position of power.  As the local sheriff, it’s his job to deal with the unpleasant aspects of human behavior.  Yet, if there is one single trigger for him it would be those that take the safety of others into their own careless hands by drinking to the point of stupid and reckless.  He has personal reasons for those demons on his shoulders, but they never, ever let him go easy on a drunk.  When he discovers Cali deep into her bottle he is about to toss the book at her, lock her up and throw away the key.  But the judge sees something in Cali that he does not and offers Cali a chance at redemption, even a new life if she is brave enough to take it.  It will not be easy, but the ending results would be worth the pain – if she is strong enough to see it through.  The choice is hers.

Echoes of the Heart is a gripping and gritty story of addiction, alcoholism, pain beyond bearing and the one shot chance that we sometimes get to make it right again.. or as challenging as being a recovering alcoholic will ever be.  As Cali works to revise the old clinic in Esterloch, and stay far away from anything resembling a strong drink in a bottle, she begins to see the beauty in this small town in upper New York.  And in its townsfolk as well, actually one person seems to never find it possible to give her a break on anything and that person is her personal overseer-er for this project.  Sheriff Jack Benfield.

Jack is fighting his attraction for Cali.  And their journey to a relationship that will work is going to be a difficult, long road.  While I could empathize with Cali’s reactions, her choices would  not have been my own, I still “got” how she ended up where she did.  Jack, well, Jack I often didn’t like very much at all.  Oh, I also “got” where his attitude comes from in his past.  And even how he had to be the way he was for the story to work as it did.  That doesn’t mean that I didn’t see him as an arrogant jerk who needed an attitude adjustment on life and Cali.  Yes, all worked out in the end.  So I have to give kudos to Cali for not only cleaning up her own act, but overlooking a lot of the crap that Jack tossed at her along the way.  Echoes of the Heart is a love story, but it’s also a look at how alcoholism affects not only the person trying to remain sober, but how those around them also play a huge part in recovery.  There were several times when Jack’s actions could have tipped Cali over into returning to her old ways – she was strong enough not to but it was close.  I think that is why Jack was the more difficult character for me to root for, even though I knew he had his own demons to chase – if he loved her, his kind of tough love was harmful. (and that’s the beauty of different readers finding different views on the same story)

I enjoyed Echoes of the Heart and would recommend it to any Romance reader who is willing to go a bit deeper into a complicated relationship.  Although this is a romance it is far from a lighthearted, fluffy one – this one will make you think, have you feel and tug at your heart for both of the characters to get their act together and love one another.  I am definitely looking forward to returning to Esterloch one day.