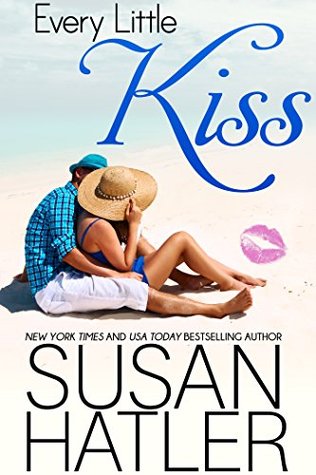 When Wendy Watts left Blue Moon Bay, she vowed never to return to the small coastal town where her parents had abandoned her and her brother. Now she’s a successful Realtor, and a workaholic who stays away from complicated emotions—until her grandmother dies, leaving Wendy the Inn at Blue Moon Bay and mandating that if Wendy sells it, she must put it on the market herself “in person.”

As soon as Wendy arrives in Blue Moon Bay, bad memories, the inn’s poor condition, and her brother’s pleas to keep the inn overwhelm her. Then she meets a sexy laid-back stranger on the beach, and Wendy does something she never does . . . she opens up and confides her problems to him. Since Max Huntington’s only in town for one night, Wendy spontaneously kisses him, hoping to be distracted from her troubles for just one evening.

But when Wendy begins the painstaking process of fixing up the inn in order to sell it, Max tells her he’s staying on longer. He’s enchanted by the charming inn and even more with the kisses they shared on the beach. He wants to help her with the repairs, and she reluctantly accepts his offer.

Although she’s determined to remain detached from the allure of her inn, Blue Moon Bay and Max, every repair, every stroll on the beach, and every moment spent with Max, draws her in and reminds her of the local legend she’d believed as a child: that being kissed by the bay under a blue moon will lead to love that lasts forever.

It’s a fair statement that I’ve never met a Susan Hatler story that I didn’t enjoy.  Some authors have that ability to give me a fun story with believable, relatable characters plus that little added life lesson woven in throughout the story.  Oh, nothing profound if that has you worried – simply something that I needed to be reminded of, at usually the right moment.  That’s not a bad thing.

We begin the Kissed by the Bay series with Wendy and Max.  Told entirely from Wendy’s point of view it’s hard to miss how much she does not want to be heading home to Blue Moon Bay.  Her grandmother’s death is a devastating blow but not the only one she’ll need to face by coming home again.  This is the place she had escaped from, the place that is filled with overpowering memories of being abandoned by her parents into her grandmother’s care.  As the memories flow back, there is very little that gives her a warm feeling of homecoming, only a dread for the task ahead of her.  Telling her brother, Brian, that they – she – would be selling the Inn was going to be difficult but she had no other choice, her grandmother and her will made that perfectly clear… but his reaction was going to break her heart all over again, she just knew it.

After the painful confrontation with Brian, she ran through the Inn to the solitude of the beach beyond.  There she broke down, allowing all the anger, sorrow and pain to escape, at least temporarily.  She was mortified to discover that her break down had been witnessed by the handsome man sitting on the beach a little bit away.  To her surprise, the stranger offered comforting words and allowed her to unload her thoughts onto his shoulders.  Max was staying at the Inn, but only for one night – one night where Wendy had let down all of her guards.  For whatever reason she felt safe with him, and as they stood by the plaque that told of the Legend of Blue Moon Bay – she kissed him or he kissed her, who moved first doesn’t matter what does is that perfect feeling of coming home – even if it couldn’t be true forever.

Every Little Kiss is, at times, the bittersweet story of a young woman who thought by leaving her past behind she would find a life that was full and rewarding.  And maybe it could have been if she didn’t also cling to the hurts, pain and anger of the past so deeply.  Wendy may have become a vastly successful realtor, but she soon begins to realize that her success has been bought at a price.  She has in fact done exactly what she is so angry at her parents for… she’s abandoned her brother, her grandmother and her circle of best friends in order to gain her escape.  It is definitely a bittersweet lesson that she will take a very long time to actually learn since she will continue to deny her actions as the same as what was done to her.

What we learn of Max is only through their conversations, interactions and Wendy’s thoughts.   What we do learn is Max is a powerfully successful man who is learning how to carve out a home for himself in a place he instinctively calls home with a woman who is everything he needs.  It’s going to take that woman a bit of time to realize his worth and that he’s telling the truth.  But when she does, life will open up with all kinds of possibilities.

This is a story where on one hand you’ll understand completely why Wendy feels as she does.  You’ll also want to sit her down for a hug, a cup of that coffee she so loves and give her a loving but stern talking to.  It’s almost painful to watch her come out of the woman she became into the woman she could be.  It has to be painful or it wouldn’t matter so much, I believe.

I enjoyed every moment of the journey with Max and Wendy.  A small town that I already love, with all the fun and quirkiness I expect.  Secondary characters who come alive off of the page, and I know that their tales will soon be told.  What’s not to love about the start of this new series.  I can’t wait to continue… and I can since the next story is already downloaded.  *wink*  Indulge yourself and simply enjoy some time in Blue Moon Bay.

(there are two covers to this book – I picked the original to show at the beginning, you’ll see the current one in the Amazon ad below)

Tags: Every Little Kiss, Kissed by the Bay #1, Susan Hatler