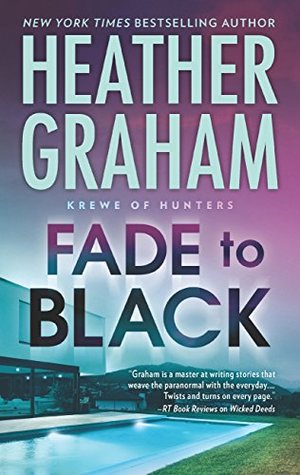 I have enjoyed Heather Graham’s Krewe of Hunters series from the very beginning.  A mixture of paranormal and suspense/mystery these stories always keep me entertained and on my reading toes.  There have been many stories and just as many couples.  I’m always glad to be reunited with old book friends and FADE TO BLACK brought back several of my favorite characters in one way or another.  Yet it was a persistent ghost and a man willing to follow his mother’s request, even if delivered in her ghostly form, that caught my imagination throughout Bryan and Marnie’s romance.

I have to admit that it took a bit of time for me to really warm up to Marnie.   At first, she came off as such a… well, witch is the most polite way of stating her rudeness and intense sarcasm.  I got that part of her reaction was her protective instincts kicking in but man… she was nasty at times.  The truth is she doesn’t believe what is right in front of her face.  Ghosts cannot be real.  This guy is just yanking her chain acting like he sees Cara, too.  Right, really right?  It will take Marnie a bit to come around to the truth of her situation, and the fact that she doesn’t have to fight against the attraction she’s feeling toward Bryan.

I won’t delve into the mystery in any Romantic Suspense, that’s best left to each reader experiencing it firsthand.  But there are plenty of suspects, red herrings tossed about, and perhaps the villain is hiding in plain sight.  Who knows?  But the discovery will give you a very good story to devour, a few unexpected chuckles along the way, and two very stubborn people discovering that love can be found in the oddest places.  I loved the involvement of the cast of Dark Harbor, that closeness to their past played very well in this story.

In all, FADE TO BLACK was an intriguing mystery that kept me guessing until the end – oh, I had my suspicions early on but too many other good suspects arrived, too.  If you love Paranormal Romance mixed in with Romantic Suspense then you’ll enjoy solving a mystery with the Krewe of Hunters and friends.

I own a Kindle edition of Fade to Black.