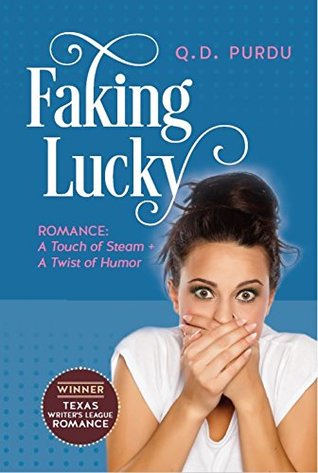 Desdemona, a pianist in the Austin life-music scene, is channel-surfing when she stumbles upon the program Marriage Exposure. The trashy television show gets people to spill all the secrets of their sex lives, and Desdemona’s ex-boyfriend just happens to be a guest. To her shock and horror, Desdemona’s ex announces on national television that he dumped her because she never got the big O. “She faked…,” he says. Every single time.

Her life is wrecked! If her friends, family and colleagues haven’t seen the interview yet, they will.

How do you survive a scandal like this? How did he know she faked? And why is it that in the bedroom, Desdemona never, ever gets lucky?

The lovable, creative and quirky heroine tackles these challenges. As Desdemona tries to run damage control on her reputation, she begins to explore her sexuality. Along the way, she will get a second chance at genuine love.

I had fun with Faking Lucky.  It’s not every day that an ex-boyfriend tells your, supposedly, best kept secret on a national reality show.  The aftermath is hilarious, heartbreaking and mostly just plain fun to watch.

Years ago, Desdemona had lost the man she considered her soulmate to a senseless misunderstanding.  They were teens, and you could have expected that miscommunication could have easily happened at that age.  Yet, Hunter was the man she held up against all others, and the others always fell far short of her ideal man.  Right now she’s in the middle of trying to do damage control from her sleazy ex’s declarations – who does that to a person, a really scummy action.  The last person she’d have ever expected to run into again was Hunter.  And now there are maybe possibilities – if everything doesn’t get messed up once again.

You’ll run the whole gambit of emotions from teary eyes to laugh out loud moments.  I liked Des, she’s probably every woman at some point in their lives.  She deserves that happy ever after with her soulmate.  I’d recommend Faking Lucky to any Romance reader.  It’s fun, it’s quirky, it’s maybe at times too realistic… and you’ll enjoy the ride.  I know I did.