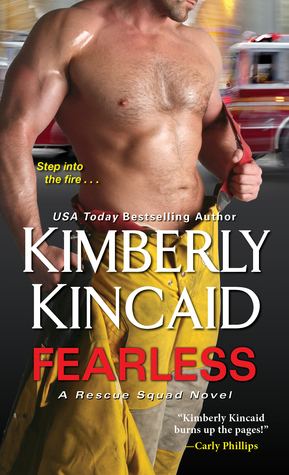 Firefighter Cole Everett’s life revolves around the firehouse. Committed to saving lives–and to the guys who always have his back in the most dangerous moments on the job–Cole’s focus is a coveted spot on the Fairview Rescue Squad. When his captain asks him to mentor a rookie firefighter, he jumps at the chance, hoping it will help to prove his skill. But the new “guy” is none other than Savannah Nelson, a female firefighter as stubbornly determined as Cole is, and a whole lot curvier in all the right places .

Savannah won’t let anyone extinguish her dream of fulfilling her family legacy and becoming a top notch firefighter–and she’s happily surprised when strong-willed, sexy Cole is willing to give her the chance she deserves. Concentrating on the job isn’t always easy when the heat between them flares higher every day, but Savannah won’t give up–not even when one of Station Eight’s veterans seems bent on trashing her reputation. To stop a string of possible arsons, Savannah and Cole will need to eliminate every distraction–but can they let their love go up in flames?

The Rescue Squad series has been an entertaining powerhouse so far – yes, I know this is only the second with more to come, but they pack a powerful punch emotionally, and with a sizzlin’ hot romance.  If you have never had the privilege of knowing a firefighter or EMT personally, then this series does such a great job of bringing to life that sense of a true family that any fire/station house truly is.  There are going to be your best buddies, or the guy who just gets on your last nerve every shift, or the company joker, or that one who you just cannot for some reason truly trust… it’s a family outside of blood with all the craziness that goes with it.  These are men and women who put their lives on the line for us civilians… but also for each other every single call.  They are the definition of “I’ve got your back”.  That definition of firefighters comes through in this series, and that is why I will follow this one through to the last story… lifelike and realistic.

Cole is just about to get the promotion he’s been dreaming of.  All that’s left is to train his replacement.  Should be easy.  Yeah, right.

Savannah comes from a long line of firefighters.  The fact that she’s female isn’t going to stop her from continuing that line, but she’s going to do it far from her family’s influence.  She knows going in that this is not going to be easy, but she’s determined, confident and ready.  Maybe a bit too confident though, the job is best done with a touch of fear and respect for the enemy, the fire.  Overconfidence will get you hurt or killed.

With a lieutenant who’s opinion of women firefighters is obvious, Savannah and Cole have their work cut out for them in getting Savannah hired over the opinion of the lieutenant… but they’re trusting in each other and letting her abilities speak for themselves.  Soon though the attraction between them starts a few sparks that just cannot be contained.  Mixing romance and the job is never easy, but despite that no involvement rule they are going with their emotions, the consequences can be dealt with if they happen.

In addition to Savannah’s training and their growing romance, Cole and Savannah are also hot on the trail of a mystery.  Fires that were ruled as accidents or electrical are not what they seem.  In teaching her how to backtrack a fire to its origins, Cole is learning that arson is being covered up.  And that sets a whole new level of danger to them all into motion.

I enjoyed Fearless very much.  It’s a tense, intriguing and entertaining read.  Savannah and Cole are a realistic couple.  Not everything goes smoothly in a work relationship, but these two keep the heart engaged even through the rough times.  The mystery aspect took a really good romance up a notch higher.  Overall, this one hit all the right notes for me and I would recommend it for any Romance reader.

*I received an e-ARC of Fearless from the publisher, Kensington Books – Zebra and NetGalley in exchange for an honest review.  That does not change what I think of this novel.*