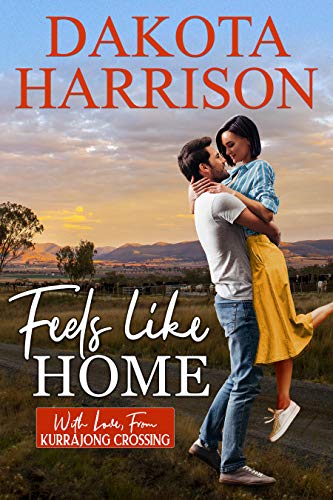 He’s the last person she ever wants to see again…

Zac Hartford swore he’d never return to sleepy Kurrajong Crossing, but after finally making it big in the music business there’s only one thing left on his mind—to ask for forgiveness from the only woman he’s ever loved. If that means stepping foot in the town that turned its back on him, so be it. He’s not there to cause trouble. He’ll simply find Cat, say his piece, and leave.

The last person Catherine Van Alden expects to see in her tiny cupcake shop is Zac — a man she hasn’t seen or spoken to since he destroyed her family and vanished all those years ago. Her desire to think the best of him hasn’t changed a bit, but he’s obviously keeping secrets and she can’t let him into her life again. Not without opening up a world of hurt and feelings best left behind.

When the truth is finally revealed, is Cat strong enough to go after the man she never stopped loving?

‘Feels Like Home‘ begins the ‘With Love, From Kurrajong Crossing‘ series with an emotional, second chance to get love right story that grabbed my attention and never let go until the end… and even then (although no cliffhanger) there are still questions in my mind that I’m certain will be addressed later in the series.

One tragic event has affected and changed so many lives.  But not everything is known, not everyone has the entire story as to what happened – no one but Zac and he’s back home to be the best man for his foster brother’s wedding, and ask forgiveness from the only woman he’s ever loved.  He knows the chances are slim, but he has to try.  Cat’s world was destroyed in one instant, and she’s spent every moment since not understanding what happened or why Zac left without a word to her.  Now he’s back in town asking the impossible… or is it?  Knowing the absolute truth is the only way she could forgive him completely, and until those secrets are revealed Cat’s holding on to her emotions tight.  What hasn’t changed over the years is the draw, the attraction, even the love Zac and Cat have for each other.  Sometimes the only way to deal with past mistakes is to simply face them, speak them out loud and move on.  The time has come for that to happen – and that discovery will once again change lives forever.

‘Feels Like Home‘ was an emotional journey that cuts deep in the heart.  I understood the reasoning for the actions at the time, but so much more harm was done by not revealing what really happened about the accident.  I think most readers can figure out a mystery within a story before the reveal, I know I often do but that doesn’t take anything away from the moment the truth comes out within the story.  To say more would be to risk spoilers that I do not willingly or intentionally do – so, I’m going to simply say that I was caught up in this world from the beginning, was rooting for Zac and Cat to go beyond the past and onward to a future together, and found redemption for one person (but not yet, for another).  I definitely want to know more and will pick up the next book in this series upon release.  If you love a good love story that will capture your emotions – then pick up Cat and Zac’s story right now.