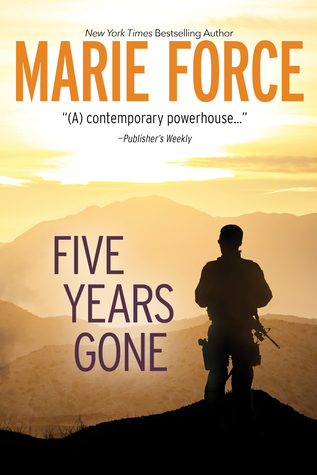 The most brazen terrorist attack in history. A country bent on revenge. A love affair cut short. A heart that never truly heals.

I knew on the day of the attack that our lives were changed forever. What I didn’t know then was that I’d never see John again after he deployed. One day he was living with me, sleeping next to me, making plans with me. The next day he was gone.

That was five years ago. The world has moved on from that awful day, but I’m stuck in my own personal hell, waiting for a man who may be dead for all I know. At my sister’s wedding, I meet Eric, the brother of the groom, and my heart comes alive once again.

The world is riveted by the capture of the terrorist mastermind, brought down by U.S. Special Forces in a daring raid. Now I am trapped between hoping I’ll hear from John and fearing what’ll become of my new life with Eric if I do.

FIVE YEARS GONE is an emotional roller coaster romance that I’m not afraid to say absolutely gutted me on so many levels.  And there really aren’t any bad guys (within the main characters) to blame for anything… and that’s frustrating, but perhaps far more realistic than we could imagine.

Ava’s story tells of the devastation at not hearing from the man she loves for five long years.  It tells of her agony, her pain, her helplessness, her aloneness without the desire to tell anyone in her family about what she’s going through.  She knew John had been deployed during their two years together but he always came home – not this time.  This event was huge and if… that a big “if”… he’s been deployed where she believes he has been then she has no way of contacting him or knowing if he’s even still alive.

At the five year mark from John’s reporting for duty, Ava has given all she can give and prepares to return home to the East Coast and try to pick up the pieces of her life.  She could never have imagined Eric, to have thought that she could find a man who has also been dealt a heartbreaking blow — or that they would connect far beyond their shared heartache or the fact that his brother and her sister are now newlyweds.  She’s falling in love and that feeling is exciting and terrifying at the same time.  But… can she really leave John behind?

We have an intriguing cast of characters in FIVE YEARS GONE, and each gets to speak to us in their own “voice” throughout this story.  I enjoyed this journey so much, even though emotionally it is hard to take at times.  Yet, the stories that make me feel are usually the ones I remember the longest.  I’m also very glad there is a sequel, ONE YEAR HOME to be able to get the entire story.  I won’t spoil the details for you as you should experience these emotions, step into these people’s lives firsthand.  But what an amazing journey FIVE YEARS GONE truly is.

Out of the Picture by Tracy Gardner

Out of the Picture by Tracy Gardner