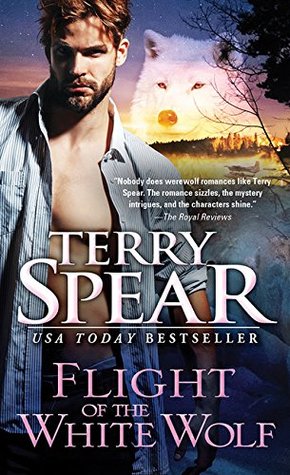 Flight of the White Wolf takes us back into the lives of friends who had been turned, most without knowing what was happening and then an on purpose turning to keep the group of friends solid, together in this new world.  This time it’s Gavin’s turn to discover what his destiny is with a woman he feels he should know but cannot place.  His current private investigator case will have him facing one of his fears – flying.  Even before he became a wolf he hated airplanes.  But this time there is no choice.  While the pilot is familiar, he”s not so trusting for he’s getting an off feeling from Amelia.  Add in a plane crash and his worst fear is realized.  It soon becomes obvious that this was no accident, and things suddenly take a more dangerous turn.

Fate or destiny or just dumb stupid luck has Amelia facing a man she’s run into twice already.  He doesn’t seem to remember one time, but he definitely will recall the other..  Since Amelia last encountered Gavin it seems he’s been turned, and now her life is going to get interesting.  She’s holding on to secrets, he’s not trusting her and together that mistrust between them could end up getting them killed.  Everything is not as it seems as Gavin and Amelia begin to acknowledge that connection, that spark between them.  Mates?  Neither would have seen that coming.  Now they just have to survive to figure out the personal parts… like, mates?

There is a sense of fate bringing Gavin and Amelia back together time and time again… maybe until they get it right.  The mystery of who sabotaged the plane, who the good guys or bad guys really are, one amazing dog and some truly adorable puppies will move Flight of the White Wolf along quite enjoyably.  I always expect to be drawn into Terry Spear’s world and this was no exception.  While some might say you could read this story on its own, I really believe to get the full enjoyment and understanding from it you need to at least have read the earlier books.  Legend of the White Wolf starts this entire long series with sub-series emerging along the way, and Dreaming of a White Wolf Christmas will not only give you a few holiday smiles but a really good story as well.  It’s a suggestion only, I mention it because I’ve enjoyed this entire long set of series and those two additional books will answer questions you may have.  But as always, it’s up to you and your need to know what is in the past books.

I completely enjoyed  my time in this world once again and would not hesitate to recommend Flight of the White Wolf or the entire series to any Paranormal Romance or Shifter Romance reader.  You’ll find intriguing plots, steamy sexy encounters with true mates, interesting secondary characters who have or will shine in their own books and simply a damn good story.