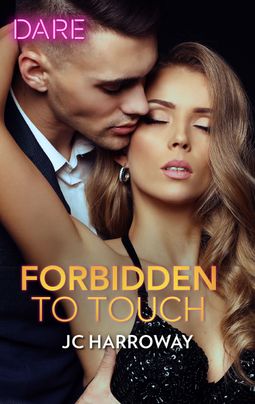 A ten year age gap is different when one is a teenager still, but when Reid and Blair reconnect years later those ten years disappear because as adults they can act on the sizzling attraction that has always been there between them.  FORBIDDEN TO TOUCH is sizzling hot, like all the titles in the Harlequin Dare™ line, yet there is a poignancy as well when we meet Reid’s father who is going through dementia.

Though Blair and Reid have known each other for years as family friends, and Blair’s intense teenage crush, now they come together under far different circumstances.  Reid’s father has gone through with plans that Reid believed were shelved, but dementia makes decisions for his father now.  When that decision brings an adult Blair back into his life Reid is about to get a wake-up call.  Blair’s not afraid to go after what she wants – and what she wants is him.

FORBIDDEN TO TOUCH is sizzling, hot, emotional and simply a darned good story.  The emotions run the gambit from intense anger to extreme sadness, with a really good dose of hot, sexy need tossed into the mix.  I enjoyed Blair and Reid’s story, and if you like your Romance on the sizzling, spicy side then you’ll want to pick up the third title in the Billionaire Bachelors series now.

« Reading Is Sweet KU Challenge ~ List One ~ And We’re Off & Reading!
Baby’s Bodyguard by Lisa Childs »