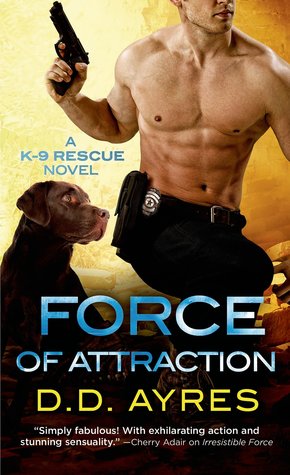 The only thing more powerful than fear is desire…

A seasoned K-9 officer with the police in Maryland, Cole Jamison has left her old life behind her. With a new home and a new partner—a protective canine named Hugo—Cole is ready for fresh challenges. A crucial position on an important drug task force is exactly what she wants…until she discovers her gorgeous, infuriating ex-husband will be the DEA agent in charge.

Agent Scott Lucca may be a pro when it comes to undercover assignments, but this job is daunting even for him. Posing as a happy couple on the dog competition circuit means he and Cole need to get a lot closer than they’ve been in years. Playing a live-in couple should seem like a walk in the park compared to tracking a brutal criminal, but suddenly nothing could be more dangerous than the passionate fire they’ve rekindled.

Read on for my thoughts on Force of Attraction.  No true spoilers, promise.

I cannot remember the last time I read a romantic suspense with three story threads winding through it that tightened those strings into a powerful experience.   None of the stories were left behind and each one mattered to the outcome.

Cole and Scott each worked in law enforcement, different areas of speciality.  They had married quickly after a hot, fast and intense romance.  It should have worked but in the end it didn’t.  Scott had gone undercover and during that operation Cole’s police precinct was called in by a concerned outsider and Cole saw her husband doing something she could not forgive, even if he was undercover.  Their marriage ended – both simply walked away, neither one fighting for what they once had.

Years later they will be reunited by their canine police dogs and another undercover operation.  Scott hopes for a chance to be with Cole, a second chance to win his ex-wife back even if he knows it’s most likely a lost cause.  Cole wants the opportunity that this assignment offers, yet it means dealing with her ex-husband again.  Undercover as a couple, who could have thought up a worse piece of hell for her.  But the situation that they would be sent in to investigate was important – and she was determined to do the job and ignore the feelings left over for her former husband.

Force of Attraction has three story threads within the main story.  There is the romance of Scott and Cole, and the attraction and emotions that never left.  There is the investigation that will cause them to appear as a couple in the dog competition circuit.  A fascinating world where Cole and Hugo, her K-9 partner will fit in easily, with a bit of cooperation from Hugo.  Tossed into the mix is an old enemy of Scott’s.  A man who was part of that long ago night that cost Scott his marriage, his undercover operation and in many ways life as he knew it.  This bitter man will make Scott’s life a living hell by going after the people most important in his life.

D. D. Ayres wove all three stories into a tapestry that told an intense, action filled story.  If you love romantic suspense, if police action gives you a special tingle then Force of Attraction is a novel you will want to read.  I don’t feel I can say much more without giving away spoilers that would take away from the reading experience for you.  A second chance at love plus a powerful story combines into an amazing read.  I sincerely hope that you will take the time to read Force of Attraction and get caught up in the K-9 Rescue series.  Intense, sensual, dangerous, funny, charming, a sit on the edge of your reading chair kind of novel that will keep you involved and guessing until the very ending.  This one is worth your time and book budget money.