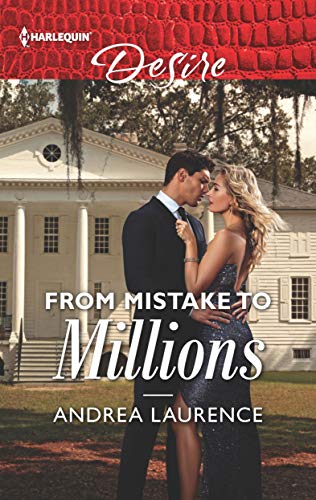 It’s late and I should be heading for sleep, instead, I’m sitting here thinking about FROM MISTAKE TO MILLIONS which I just finished.  I didn’t trust my impressions to stay with me so I’m writing up this review now simply because this story is so good, so compelling that I don’t want sleep to rob me of my thoughts on Harley and Jade’s romance.

When Jade took one of those DNA tests that was given to her entire family as silly Christmas presents she never expected that the results would change her entire world.  She never felt like she fit in with her family, certainly not the husband who she’s left far behind, or even just in her own skin.  Something was off but she could never pinpoint it to anything solid until the results of that DNA test proved what she always knew – she didn’t belong with the family she grew up with.

Harley and Jade had been sweethearts during school.  The bad boy and the good girl – and maybe they never really had a shot back then since she married someone more suitable and he took off for the military.  But today Harley is a much different man, on the outside at least.  Successful, competent, wealthy and self-assured he now heads up a multi-million dollar security business.  He never thought that the woman he’d once loved, who once left him behind would be part of a case he’d take on.  But this was Jade, and she was in trouble deep.  With a thought to answering some old questions and helping out someone who once was important to him Harley headed to his future – he just didn’t know exactly what that future would end up being.

The tensions, both sexual and emotional, are so strong throughout FROM MISTAKE TO MILLIONS.  Harley and Jade have chemistry that leaps off the page.  There is never any doubt that these two belong together.  Getting them to acknowledge that may take a bit of time.  There is danger from the past and in the present in this story.  There is also a sweet and sexy second chance for two lovers who should have stuck together no matter what, but they didn’t.

I had such a good time with this first story in the Switched! series and I definitely want Morgan’s story right now but I have to wait a little bit longer.  If you love not only a good romance but a bit of a mystery as well then you’d enjoy FROM MISTAKE TO MILLIONS.  I’d not hesitate to recommend this one to any Romance reader – you’ll be waiting for the next one to arrive, that’s how caught up in these lives you’ll be.  Loved it and now I can head for sleep.  *grin*

I own a Kindle edition of From Mistake to Millions.