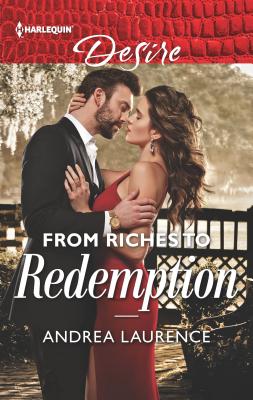 FROM RICHES TO REDEMPTION is just as heart-pounding as the first title, FROM MISTAKE TO MILLIONS, in the Switched! series by Andrea Laurence – but for far different reasons.  An arch from Harley and Jade’s story continues and adds the hint of ongoing danger and mystery to this romance.  But it is the emotional heartbreak for both River and Morgan that was the excitement for this story, and it packs quite an emotional punch on so many levels.

I was easily swept back into this world from the beginning, as though where one story stopped the next picked up immediately – or it felt that way.  Actually, some time has passed, enough for the sudden shock of realizing that she’d been switched shortly after her birth and was not, in reality, the Steele heiress.  Yet Morgan still lived at home, or at least for now while she was back in town for this project, she still had her job with her father’s company or the man she’d called Daddy her entire life.  So while much has changed, much has remained the same – that is until River Atkinson showed up at a company event.  The man she’d once married only to be snatched away by her father and replaced by the dollar signs on a check.  River is not the poor young man he once was, in fact, he’s nothing like that man now – but then, neither is Morgan the same young girl he once loved.

I try, very hard, in reviews to not say more than is said or alluded to in the Cover Description – to say more is not fair to future readers who should discover the ins and outs of every story on their own – but, oh, how I wish I could talk about FROM RICHES TO REDEMPTION.  Morgan has experienced such devastation and heartbreak, and the same can be said about River although in a slightly different form.  Their story is full of the best of intention lies and deceptions, of half-truths and misconceptions.  I understood the reasons even when I didn’t agree with them.

There is a real danger, passion, renewed love, a second chance to get it right this time for Morgan and River.  But they each have to forgive and be willing to risk their hearts once again.  I enjoyed every moment spent back in this world, and I’m waiting for the next story in early 2020, that’s for certain.  If you love a story that will break your heart and eventually heal it back up better than before, a touch of danger, strong passion and catching up on the happenings on the previous couple in a series then you’ll want to pick up FROM RICHES TO REDEMPTION.  It’s an addicting series.

I own a Kindle edition of FROM RICHES TO REDEMPTION.