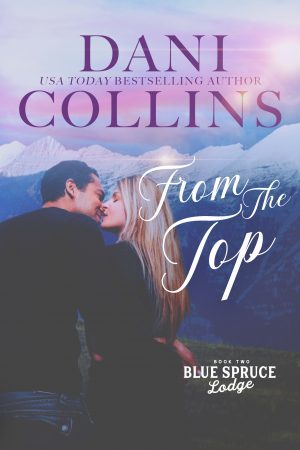 Ilke and Nate had one amazing New Year’s Eve, in a very private celebration.  It was supposed to be a one time thing, but fate had something different in mind for these two.  Ilke was working toward one goal, and that doesn’t include a family.  Now faced with an unexpected pregnancy, Ilke has to face the man she can’t get out of her mind.  Neither are prepared for a relationship let alone a baby but somehow they have to make this work – and not simply because of the baby but because of themselves.

From The Top takes us back to the Blue Spruce Lodge series with two people who don’t do relationships, each has emotional scaring that they have difficulty trusting in someone else again yet their feelings for each other won’t go away.  Life can get complicated, but Ilke and Nate have to decide what is worth the complications they bring to each other.  Their story has sadness and joy, fear and acceptance, and a love that is worth the risks they’ll have to take to trust each other.

Secondary characters can make or break a story for me.  The glimpses we get of Rolf and Glory, a budding romance between another couple and hints at things to come was the just right blend of secondary characters being a part of Ilke and Nate’s life.  ( it’s when secondary characters take over the story that it gets a bit rough – and that was not the case here)  The lodge itself becomes a character as it is rebuilt with come complications.  I enjoyed my time in this world once again and would not hesitate to recommend From The Top to any Contemporary Romance reader who enjoys a solid story, interesting characters and a beautiful setting.