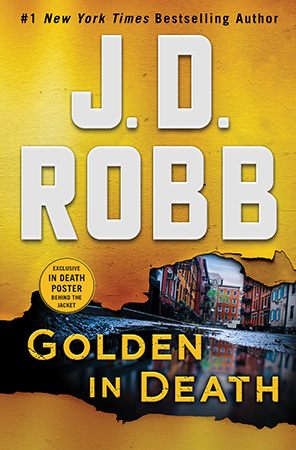 I am very proud to be able to say that I’ve followed the in Death series from the very first glimpse of Eve and Roarke in Naked in Death — and what a ride it’s been on the way to the 50th book Golden in Death.  Since the beginning of this journey in 1995, the in Death universe has expanded to include so many additional characters who have become part of this ensemble cast of a diverse and simply amazing cast.  Some, like Peabody, we expect to see every single story others like Dennis Mira (Dr. Mira’s sweet husband that Eve freely admits to loving unconditionally) make the occasional appearance and that sense of family reunited is usually stronger for the time between visits.  Every character plays a part, a necessary part of the whole and that is probably one of the several reasons that I return to this universe very release day without fail… and I don’t see that changing any time soon.

The tone of Golden in Death is a wee bit different – not in a bad way but in a sense of emotional punches delivered to ordinary people simply living their lives until someone with a grudge decides to steal their love away from them through the delivery of a cheap, ordinary plastic golden egg.  Almost instant death, but long enough to suffer – and the suffering of their loved ones left behind is felt deeply throughout this story.  The in Death series isn’t one where I’d normally get teary-eyed (unless the main character was involved), yet sweet, loving, kind Dennis Mira brought me to tears simply by being himself in this one – and the story was made even better for that.  There is a softening of the edges feel to the first half of this story, mainly because of the emotional fallout from the murders and partly because of the sense of family that comes together as this team begins investigating, putting puzzle pieces in place and then *bam* it begins to build as we follow uncaring killers with no care of the consequences are tracked down and one heck of an interrogation room scene is gifted to us.

I loved the heck out of Golden in Death.  After 50 books are Eve and Roarke slowing down, losing their edge – please – no way that’s even possible for this power couple.  Yet there is a different tone to them now, softer edges maybe, a knowing each other and how they’ll react, those pesky marriage rules that Eve doesn’t understand but tries to follow – small things that speak of people who know each other, anticipate each other, and all of these characters fit so well in their world together.  I would, quite happily, follow another 50 books of Eve and Roarke without a doubt.  All of the in Death books “could” stand on their own as far as the mystery goes, the relationships have developed over the course of this series, but the solving of mysteries can stand on its own.  If you haven’t discovered this world then Golden in Death would be a good place to start (normally I’d recommend starting from the beginning, but 50 books is a long way to “catch up” from) – this one gives you a good overall sense of the series, the relationships plus an emotional mystery to solve as well.

I own a Kindle edition of Golden in Death.

Degrees in Love by Tavi Wayne

Degrees in Love by Tavi Wayne