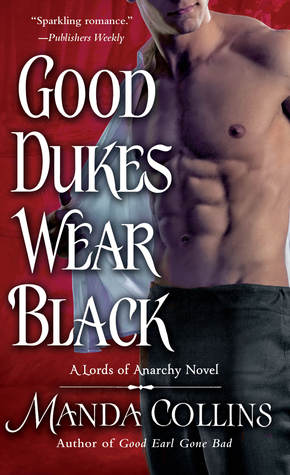 A writer for the Ladies Gazette, Miss Ophelia Dauntry’s passion is her pen. So when she sees a fellow writer kidnapped before her eyes—and the trail of evidence leads to the Lords of Anarchy—Ophelia vows to find her friend and take down the notorious London driving club in her column. But before she can argue her case, she needs the inside scoop from its newest leader: Piers Hamilton, the Duke of Trent.

Headstrong, handsome Trent joined the Lords of Anarchy after a decade in the British Army. He’s made it his business to tame the misbehavior within the driving club—and the infuriatingly attractive Ophelia is only getting in his way. The deeper she digs into the case, the more she puts her own life at risk. Can Trent convince Ophelia to trust him to seek justice…and find protection, and passion, in his arms?

I have to say up front that Piers Hamilton, the Duke of Trent is the embodiment of what I envision an Historical – Regency Hero to be.  He is strong, stubborn and authoritative.  He can also be gentle, kind and understanding – and let’s not get started on the sexiness of the man.  Yes, I’m afraid I’ll be picturing Trent as the hero of many a book to come – because they all should be that pure male.  Just sayin’.

It’s a sad historical fact that at one time a woman could be hauled of to an insane asylum on the mere word of a male relative.  No examination.  No doctor visit.  No proof – or help.  Simply locked away for possibly the rest of their lives on a whim or a plan.

Ophelia sees her friend, Maggie, being led off in chains from the streets of London straight to an insane asylum and can do nothing to stop it.  The trail of evidence behind this action appears to lead straight to the driving club, The Lords of Anarchy.  She needs information and what better place to find it than at the source.

Trent is determined to clean up the driving club.  It’s working, but it’s slow work.  Now Ophelia is stating that a member has basically had her friend kidnapped and tossed into an asylum – and it had to be one of the members of his club.  As Trent and Ophelia investigate other matters are coming to a head.  Like Ophelia’s mother’s intent to see her married to a man of her choosing not her daughter’s.

There is an attraction between Ophelia and Trent, one that this handsome man is not about to let slip through his fingers.  He enjoys her company and is falling for her charms and that is perfectly alright with him.  Now all he needs to do is eliminate the competition, convince the lady that she would make an amazing Duchess and all will be right with his world.  Oh, and save her friend.  So much for a Duke to tend to – but for his lady, nothing is too difficult.

It’s always a bittersweet moment for me when a series that I’ve enjoyed comes to a close.  Good Dukes Wear Black was the perfect final chapter in The Lords of Anarchy series… but maybe we’ll get a holiday novella one day to bring our couples back for a bit.  It was a treat to reconnect with the couples from the previous stories once again.  And Trent along with his lady, Ophelia make such a delightful couple.  A great part of Trent’s charm was his ability to take Ophelia exactly as she is – no need to remake his lady, she is fine exactly the way she is.

Secondary characters always matter and we have quite a few that need a closer look during this story.  The mystery to be solved is an intriguing thread woven throughout this story and by the time the reveal takes place we’ll have more than one suspect.  I personally love red herrings and always believe that some explanations are simply too good to be true at first glance.

I would highly recommend this story and the entire series.  If you long for that perfect hero, if a touch of mystery tossed in with your romance delights you then this is a story that you’ll want to pick up.

*I received an e-ARC of Good Dukes Wear Black from the publisher and NetGalley in exchange for an honest review. That does not change what I think of this novel.*