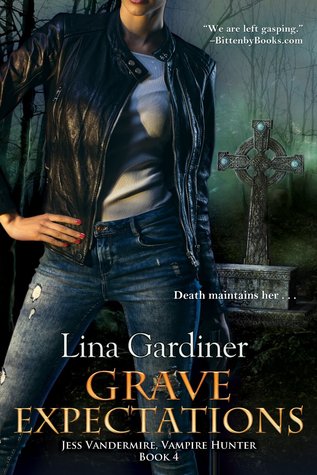 I’ve enjoyed each of the Jess Vandermire, Vampire Hunter novels and Grave Expectations is no exception.

Britt’s new powers to destroy vampires has him extremely on edge.  He needs to understand how this power came to be.  Why he can only vaguely remember a monk chanting over him.  And why it seems he’s not the only one in the city with a major new found power.  But most of all is his fear that he will harm Jess in the midsts of a sexual moment with only his mind.  Because of that fear he’s keeping away from Jess – and neither one of them is happy about that especially Jess.

Father Regent has returned after being summoned to the Vatican a changed man.  No, really a physically changed man.  He seems to have dropped thirty years since that visit.  And he also has no real good memory of how that was accomplished.  At first Jess and Britt are suspicious of the man who says he’s Regent but are eventually convinced.  Now their concerns are even higher when Regent bars them from his church for the foreseeable future.  Seems he’s getting visitors and they only want him in residence.

There’s a new con man in town.  Malcolm Fisk claims to be an evangelist but what he is doing is far from spreading the Good Word.  He is convincing vampires that he can allow them to walk in the day – for a price of course.  Smoke and mirrors.  He has the same powers as Britt and is determined to bring Jess’s lover over to his way of thinking.

The Guest who is staying in Jess’ vault at the rectory is by far the most dangerous thing Jess has ever encountered.  And when Regent’s story and Britt’s story slowly meld together the results are unexpected and explosive.

I would highly recommend this latest edition of the Jess Vandermire, Vampire Hunter series to anyone who enjoys good, detailed paranormal series and almost non-stop action.

*I received an e-ARC of Grave Expectations from the publisher and NetGalley in exchange for an honest review. That does not change what I think of this novel.*