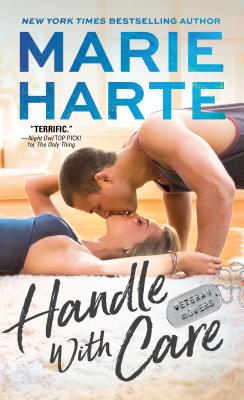 HANDLE WITH CARE is the third story in the Veteran Movers series, and this one delivers the solid, good story that I expected and more.  Evan is what I see as a “real man” in romances – he’s not always smooth, he’s not afraid to show emotions, he fumbles, he’s occasionally clueless – and I loved all of that about him.  He’s real and that makes him relatable for me.

Kenzie has had responsibility for her younger brother since their parents’ deaths.  She’s been burned badly by the “perfect” man, the man who walked when she put her brother, Daniel, first.  Now she’s scared to trust her judgment on any male, so, for now, she’s not looking – until her brother brings them together in a most unusual way.

I was definitely more on Evan’s side of the story in this romance.  I liked Kenzie, yet she was so quick to judge Evan, to not believe in what was right in front of her, and because of her reactions to or actions toward Evan, it took me a long while to warm up to her.  We get another great crew of Kenzie’s friends in this story – and maybe we’ll see them again in the future.  There is definitely an emotional feel to HANDLE WITH CARE, just not in an obvious in your face way.  I had fun with this one, as I have with this entire series.  If you love a good romance with some tempers flaring, some real emotions showing, and a couple that belongs together but have to risk being hurt before that can happen – then you’ll enjoy this one.