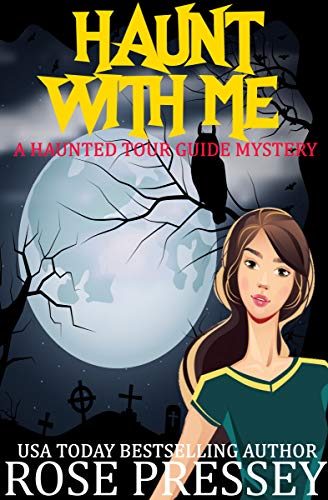 Ripley Van Raden’s life centers around the spooky. At every turn, Rip finds herself drawn into paranormal trouble. By day, she’s the head librarian in Devil’s Moon, Kentucky, and at night, she guides people on her ghostly tour of the haunted streets and buildings of their town.

Rip is planning a charity Halloween party at the library. Things aren’t going by the book though when a couple of spirits crash the party. Plus, a local shop owner is accused of murder and an antique box might hold the clue to solve the case. Adding another chapter to the story, a mystery man is following Rip, and soon she suspects he wants her dead.

The only way to solve the crime is to continue the nightly ghost tours around town. But if the mystery man finds Rip, the ghost tour might be the final chapter of her story.

Titles in the A Haunted Tour Guide Mystery series include — These Haunts Are Made For Walking – A Walk on the Haunted Side – Haunt the Haunt, Walk the Walk – Walk This Way, Haunt This Way – Take A Haunted Walk with Me – Hauntin’ After Midnight – Keep On Haunting – You’ll Never Haunt Alone – The Walk That Haunts Me – Haunted Girl Walking – Walk In My Haunted Shoes – A Haunted Walk to Remember – Haunt with Me –

(I’ve read all but two of the previous stories in this series.  They were reviewed on a blog that no longer exists, and I doubt that I’ll recreate those reviews here now.  The fact that I’ve just completed the 13th story in this series should tell you all you need to know about whether I think this series is worth the time or not.  🙂 )

Once again in ‘Haunt with Me‘, Rip is about to find herself face to face with more than one ghost… and one very nasty one indeed.  It began like any of Ripley’s ghost tours, right up until their group discovered a body – and Rip saw the first ghost.  Then the search is on for answers as to who, or why so many ghosts are appearing – and those questions and danger head for our usual crew fast and furiously from the living… and the dead.

I’m always easily caught up in any of the ‘A Haunted Tour Guide Mystery‘, returning to this series is now like visiting with old friends.  I enjoyed myself, the danger is obvious, the actual murderer is in question, and watching Rip and company sort out the clues was entertaining.  Although I don’t usually mention it for to me it’s often a small overall thing, this was one of those times when the wrong word was used in a sentence or the wrong name completely took me out of the story.  It happens, things are overlooked, but that truly does affect how I react to any story – I’m in your world, I don’t want to be yanked out by something that could have been avoided.

One last thought… that ending!  Now I’m definitely going to be watching for the next release.  If you enjoy Paranormal Cozy Mysteries then you should be reading this series and this story.