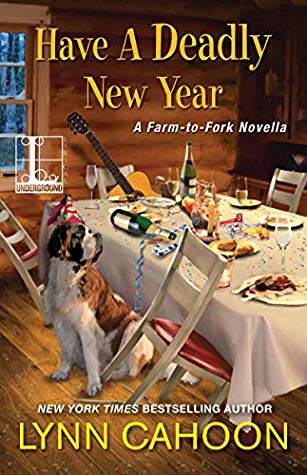 Chef Angie Turner of The County Seat—Idaho’s finest farm-to-table restaurant—is preparing a private dinner in the mountains during ski season, but the trip’s about to go downhill

It’s a rockin’ New Year for Angie and her crew as they cater a bash for a famous band—and as a bonus, they’ll get to stay at the singer’s Sun Valley house for a whole week once the party’s over. But there are hints of discord, and the event hits a sour note when one of the musicians is found with a drumstick in his chest.

Is this a case of creative differences turned lethal or is there another motive at play? Angie’s jumping out of the frying pan and into the fire as she and her fellow foodies try to solve the case before the killer comes out for an encore.

Titles in the Farm to Fork Mystery series include – Who Moved My Goat Cheese? – Killer Green Tomatoes – One Potato, Two Potato, Dead – Have A Deadly New Year (novella) –

I had such a good time with HAVE A DEADLY NEW YEAR, even though this is the first story in the series I’ve read.  I was very glad to find that I wasn’t the least bit lost and could easily step right into a Cozy Mystery that kept my attention throughout.  But, it also gave me a taste for this series which I’ll pick up throughout 2020 to get caught up on because I do want to know how it all started – that’s just the type of reader I am.

Angie and part of her crew are catering to a rock band’s reunion and plans for a getting together again tour.  It helps that one of the rock stars is a friend of Felicia and that after this gig is done they all get to stay at a rock star’s home to just relax and plan for next year’s menu back at work.  Unfortunately, things did not go exactly according to plan when one band member is attacked and left for dead.  Now with a child missing and a blizzard overtaking them the local sheriff has other priorities to the living and Angie and her crew are left behind with a killer still among them.

There are twists and turns and a delightful story here in HAVE A DEADLY NEW YEAR.  Shorter length doesn’t mean less danger or suspects that’s for certain.  I enjoyed myself in this world.  This story was enough of a taste of these characters that I will be following future stories and catching up on the previous titles.  If you love a good Cozy Mystery with an entertaining cast of characters and a puzzle to solve then you’ll want to pick up this story soon.