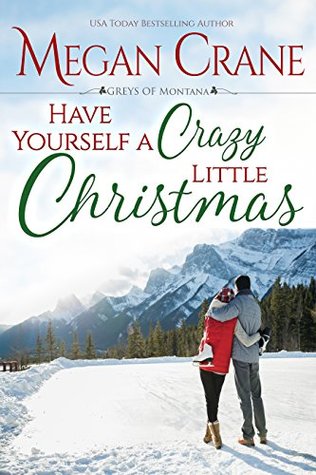 Dependable Devyn Voss is no stranger to cleaning up her mother’s messes, but this one’s gone supernova. In search of love, her flighty mom has invited all of her exes to celebrate her Christmastime 50th birthday. Which is trouble enough, but only gets worse when Devyn’s former stepbrother shows up to the party. His dark brown eyes and lazy smile still setting sparks off inside of Devyn that she’s desperate to ignore.

Nashville songwriter Vaughn Taylor only came to the party to support his dad. And if he happens to see his pretty ex-stepsister there, that’s just fine. But the minute he lays eyes on her, he’s gripped by all his old desires–to undo all her uptight and get past that guarded exterior.

They were never supposed to see each other again, but now that they have–all those sparks have become a bonfire. But will this little bit of Christmas crazy last… or will it end with the season?

Titles in The Greys of Montana series include:  Come Home For Christmas, Cowboy – In Bed With The Bachelor – Project Virgin – Cody – Have Yourself A Crazy Little Christmas –

Have Yourself A Crazy Little Christmas made me all kinds of happy as a reader in general – and as a follower of the Greys throughout all the various “series” their stories have been a part of.  It was, frankly, pretty amazing to get to catch up with so many familiar faces, even if they weren’t in Marietta, Montana for this particular Christmas celebration.  Anyone knows that whenever the Grey relations get together there’s going to be some kind of a party involved even if it’s a simple welcome home celebration.

Watching her mother go through life chasing that elusive love of a life time in her slightly flighty, crazy manner has made Devyn the woman she is today – dependable, stable and she never, ever colors outside the lines.  Now Melody is planning a huge 50th birthday celebration for herself the day after Christmas, and she’s inviting all of her ex-boyfriends, ex-husbands or simply ex-lovers along for the ride.  It’s up to Devyn and her sister, Sydney, to do the honors of putting this shindig together and their mother somewhat in line – except, once again, Sydney’s top secret Washington job means she won’t get here at the same time as Devyn.  And that is annoying and typical but Devyn moves forward.  The absolute last person she expected to run into at the airport was Vaughn Taylor – the almost step sibling from the years Melody and her daughters lived with Vaughn’s father.  They never married so Vaughn was never a true stepbrother but close enough.  They’d both been teenagers around that time, and even then the heat between them was apparent even if it came off as dislike and scorn.  Where’s there’s smoke the saying goes… and the smoke was billowing even back then.

Vaughn was in Jackson, Wyoming for one purpose – to insure that his father doesn’t fall under Melody’s magical spell once again.  He has nothing against Melody really just that she’s not the woman for his father.  What he hadn’t counted on was the spark of heat at seeing Devyn again.  Or the instant need to brand her as his.  Hell, he wrote country songs about this kind of feeling but hadn’t expected to be on this end of those words.  Somehow through this crazy holiday week he’ll find a way to test those feelings… and he’s not really prepared for the answers he’s going to find.

I had such fun with Have Yourself A Crazy Little Christmas.  Not only did I get to touch base with some favorite couples of my reading past, but got to add another couple to that list.  Devyn and Vaughn were simply amazing together.  Yes, at times frustrating until they got themselves sorted out.  But they were indeed magical together.  I absolutely adored Devyn’s father.  The moment he appeared on page I was hooked and kept seeing Sam Elliot every time he appeared… the hair, the voice, the self-assured man in his own skin that he portrayed.  And I’m really waiting now for Sydney’s story.  She has her own demons to fight I’ll be waiting to meet the man who can ease her heart. In all, I had a great time and I believe you would as well.  I’d definitely recommend this story or any and all of the other Grey romances.  You’ll find solid stories, interesting characters and unique situations.  Exactly why I read Romance.

« The Billionaire’s Sexy Rival by Leslie North
A Promise For Tomorrow by Stacey A. Purcell »