Heir To The Pack by Laura Welling 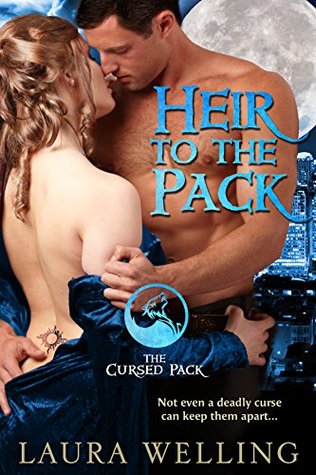 Jack was fading away, right in front of her eyes and no medical person she’d consulted understood why.  Annie was a genetic scientist, she should be able to track what was happening to her son – but she’d need to contact his father.  And that was something she hadn’t wanted to do.

Dash had a lot to deal with recently.  The death of his father.  The likelihood of his becoming the crowned King of the shifter community, troubles within and outside of his pack and now… a son and the woman he’d not forgotten from their amazing time in Cancun, even if it was only a few days.  Annie had impacted his life, but she was human and he was… not.

Jack has been cursed.  Perhaps not him directly, but as a result of an ancient curse, Jack was now seriously ill and fading fast.  It was up to Annie, Dash and members of his family and pack to remove the curse and save Jack’s life.  And, if along the way, Jack’s parents discovered and acknowledged just how right they were for each other… that would be the love of a lifetime and a new way of life for Annie and Jack.

Heir To The Pack is the start to an involved, complex and exciting series, The Cursed Pack.  This is a tantalizing tale with twists, suspects, traditions and emotions creating a unique world.  With a truly intelligent heroine, a sensitive Alpha hero and a child who needs them both, this was a story that doesn’t follow the shifter trends but makes its own pathway.

I enjoyed this one very much, now the wait for the next story.  If you love shifters then this is a pack you’ll want to discover.  Definitely recommend this for paranormal romance readers, it’s hot, sexy with a good story and engaging characters.  Hits everyone of my important buttons.  Check it out for yourself.

*I received an e-ARC of Heir To The Pack from the publisher and NetGalley in exchange for an honest review. That does not change what I think of this novel.*