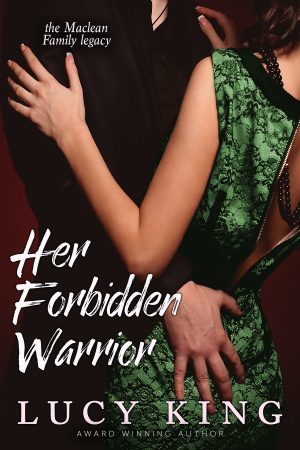 Breaking up isn’t that hard to do…

Not when Cora Maclean’s cheating scumbag of an ex disappears with a ring that has been in her family for a century. It’s the putting her life back together afterwards that’s the problem. How hard can it possibly be to go to Spain, find her ex and persuade him to return the heirloom? Her plans definitely do not include rekindling a decade-old crush on a man who once broke her heart.

Former special forces operative turned businessman, Lucas Hart, has a job to do–one that now includes keeping reckless Cora Maclean out of danger. So what if she’s more gorgeous than he remembers? She once hurt him badly and that’s not something he’s inclined to forget. His sole aim is to finish the job while keeping her safe, and he has absolutely no intention of falling under her spell again. Besides, Cora has sworn off men for now.

Titles in The Maclean Family Legacy series include:  His Best Mistake – Her Forbidden Warrior –

I was really hoping that Cora might have made some changes from the character she was in His Best Mistake.  She might have softened a tiny bit, yet she’s still the same impulsive, must have her own way or no way Cora.  Once again, I’m more intrigued with the non-member of the family this series is named for… Lucas.  I get that Brad is an absolute jerk for his actions, and he’s a bit more of a bad guy than we first thought.  But I simply couldn’t connect with Cora, and I’m truly sorry for that as Lucas is a sweetheart.

Lucas was already on the case to find the man who stole the Maclean family heirloom, what he didn’t need was Cora Maclean dropping herself right in the middle of his investigation – and placing herself in extreme danger.  Stubborn woman.  They had a past, they’d hurt each other and he wasn’t looking forward to rescuing her butt again but he really had no choice.  What he didn’t realize was that there were mistakes on both sides of their one night together, information he didn’t have that changes things.  He might have a second chance with this infuriating, sexy woman if he can keep her out of danger.

Her Forbidden Warrior is fast paced, steamy, and full of intrigue.  I adored Lucas, and really didn’t like Cora… but that doesn’t change the fact that this is a good story that will keep your attention on the pages throughout.