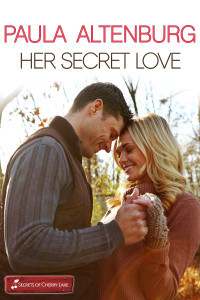 Whoever claimed it’s better to have loved and lost has never met Jess Palmer.

Small business owner and metalworks artist Damon Brand finally has his future in sight when his past rattles into town in a broken down car stuffed with designer clothes and sky high heels. The last time he saw Jess, he declared his undying love. In return, she stranded him by the side of the road, taking his boots, pants and the tattered remnants of his heart.

So much for the bright lights of LA. Failed actress Jessica Palmer arrives back in Cherry Lake, Montana homeless, destitute, and desperate. She’s hoping her grandfather will let her have her inheritance early so she can make a fresh start—anywhere but Cherry Lake. No deal. She has to stay for six months and get a job to prove she’s matured. Not easy in a town where she flamed all her bridges in order to flee a wild child reputation and her high school sweetheart.

With every door that’s slammed shut in her face, Jess grows more determined than ever to prove she’s changed, even if it means she must turn to her first love, Damon, for a job at his gas station. Surely 10 years is enough time for him to forgive and forget.

Read on for my thoughts on Her Secret Love.  No true spoilers, promise.

Jess returned home to Cherry Lake a broke woman.. broke not broken.  There was a huge difference in her mind, and perhaps in reality as well.  She’d been so sure her career as an actress would take off.  It hadn’t, mainly because of a learning disability that her parents had never acknowledged and she had learned to bluff her way through.  Jess couldn’t read very well, so that the parts she’d read for would often have scripts handed to her on the spot she had no time to memorize the lines… so the parts that she might have been brilliant at were beyond her reach.  Of course, it was just her luck to pull into a self-serve gas station with no knowledge of how to pump gas and it ate almost all of her remaining cash.  It was also her luck to pull into the gas station where the one man she’d hoped to avoid was working.  Damon.  The one man she’d hurt the worst on the way out of Cherry Lake.

Damon reluctantly let Jess have a job at the cash register in his business.  He didn’t consider himself a vindictive man, but he did manage to give Jess some pretty nasty duties as his daytime help.  Like cleaning the restrooms.  Yeah, not vindictive – much.  Jess surprised him.  She didn’t fuss, she put up with the cross examinations of the townsfolk who happened on purpose to drop by Damon’s place.  With a smile and sheer guts she was polite and cheerful no matter how nasty the comments.  She had matured beyond what Damon had expected, yet she carried a sadness with her that slipped through when she thought no one was watching her.

Her Secret Love is a charming tale of a woman who bluffed her way through her youth, desperate for her parents attention she did every outlandish thing she could think of and then some to catch their affection..  It didn’t work and in fact backfired on her.  Back on that night when she had humiliated Damon she was scared.  Scared about how he made her feel, scared at what he thought she was…perfect.  She was so far from perfect and she knew it so she ran.  It’s a story of a woman coming into her own, realizing her own worth and ability to take care of herself in a very difficult situation.  And a tale of two people once in love working their way through the wreckage of the past to a possible future.  It was touching, happy and sad combined so well that even when Jess was at her happiest, the veil of sadness could still be felt by the reader.  Jess is a complicated woman attempting to rewrite herself in front of a town, family and a lover who don’t really expect her to succeed but will rally behind her when she proves them wrong.

Damon and Jess were such a heart wrenching couple.  With their past there was a lot to overcome on both sides.  And they both did that with dignity and laughter.  A sweet love story, a little bit complicated with a satisfying ending that pulled all the past and present threads together.  I enjoyed Her Secret Love and would not hesitate to recommend this addition to the Secrets of Cherry Lake series.

*I received an e-ARC of Her Secret Love from the publisher and NetGalley in exchange for an honest review. That does not change what I think of this novel.*