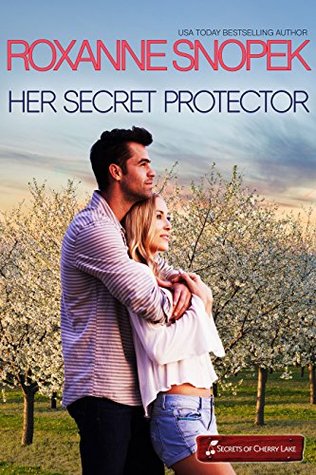 Cherry Lake’s official photographer has a problem. The boudoir photos Carrie Logan used to do, long ago and far away, have come back to haunt her. So she turns to Ethan Nash, the mysteriously gorgeous guy with big dogs and a bad attitude, for help containing this secret and the scandal it will cause.

Ethan takes one look at the photo of young Carrie and his harsh cyber-security specialist exterior begins to melt. For some reason, he feels the need to help this beautiful photographer. He’s pretty sure she’s stuck– once something’s on the internet, it’s there forever- but he offers her his assistance anyway. There’s something about her he finds irresistible…

What Ethan doesn’t realize is that he might need Carrie’s help far more than she needs his… Will she prove to be the one he needs?

Read on for my thoughts on Her Secret Protector.  No true spoilers, promise.

Misconceptions.  Small town gossip.  Combine those and you have a disaster about to happen.  Ethan had moved to Cherry Lake about four years ago.  He hadn’t taken time to make friends, court the local citizens nor to even think how his non-actions would appear to his neighbors.  He’d been nursing some wounds of his own at the time and the move to Cherry Lake was a fresh start.  He didn’t know that he had outbid the Mayor over the property he now called home.  Or that when he’d bulldozed the property, which quite honestly was falling down, that he’d razed what was considered a heritage property to rebuild.  Not to mention that it had belonged to a member of the most prominent old families in Cherry Lake.

When his larger dogs Ashur, Mars and Gun were in a local park for a run, and under his complete control… and an over-reacting mother takes exception when one of his dogs tried to play with her toddler’s ball, well let’s just say things went downhill fast.  Ethan has a lot to learn about small town living.

Carrie’s day didn’t start off well at all.  At first the security breach notice didn’t bother her too much… until she discovered that a photo that had been taken years ago was out on the internet instead of in the so-called secure, password protected file it was supposed to be in.  That was the first bad step in a whole line-dance full of mis-steps.  Carrie is a professional photographer, now back home in Cherry Lake she’s doing weddings, school photos and documenting the Festival.  She no longer takes the glamor shots that she once did.  Even though those shots were by no means objectionable – they were tasteful photos for boyfriends or husbands, and for some women a chance to document their bodies as they were before they underwent cancer surgery or to show a sexually attacked woman that her body was still desireable in a non-threatening manner.  The boudoir photos were not lewd in any manner – but try telling that to the small town biddies and gossips.  Forever Yours, Carrie’s pride and joy company was heading downhill at an alarming rate.

When Carrie turns to Ethan for his security expertise neither one ever thought that they’d be stirring up even more gossip or that love was in their futures.

Her Secret Protector was such a delightful story.  There is obviously an attraction and a budding romance between Carrie and Ethan yet their story blended in with the story of a small town caught up in the throes of other people’s business and how easily casual and on purpose gossip can destroy a life.  Ethan’s adorable dogs played such a fun part of this entire story.  I love it when pets or animals’ actions are almost as important as the human’s to a story – it adds another sense of believability and just real life.  This story was touching, moving and brings out a bit of the avenging angel in me over the way Carrie and Ethan are treated, especially by people I would have thought better of.  A good lesson in that gossip  is truly destructive, even when loved ones should know better.

*I received an e-ARC of Her Secret Protector from the publisher and NetGalley in exchange for an honest review. That does not change what I think of this novel.*