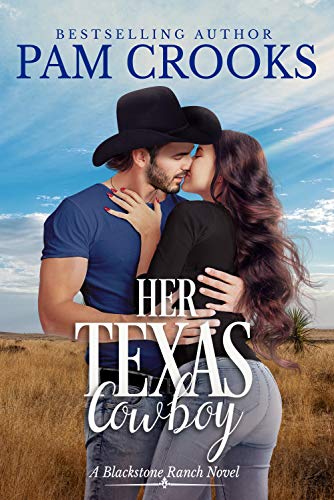 Her Texas Cowboy continues The Blackstone Ranch series with a romance that is as complex as it is basic.  Lucienne and Brock might be from far different parts of the country but the chemistry between them is a force to be reckoned with and holds the possibility of a lifetime… right after they get that complicated part taken care of that is.

Lucienne is facing a dismal future.  She’s been accused of a crime she didn’t commit (that was her father’s girlfriend making it appear to be Lucienne’s doing), she facing the loss of her chosen career, and the only way her father and his lawyer will help her bring the truth out is through a plan that sets her teeth on edge.  She’s about to head to Texas to help set up the resort that the Paxton’s are opening for she cannot do anything more in New York now.  But, in order to get the help promised she has to convince the Paxton’s to sell part of their property.  It feels sleazy and it is but she’s also facing the possibility of jail time for something she didn’t do.  So, yeah, Lucienne is between a rock and a hard place no matter which way she turns.  She didn’t expect to respect the landowners, come to care about the family, or fall in love with a cowboy that could break her heart with one decision.

Brock might have had his doubts about this ghost town resort thing, but he’ll support his family no matter his opinion.  When a beautiful New Yorker shows up to deck out the resort he’s not blind to her beauty, but he has questions.  It doesn’t take long for Brock and Lucienne to find themselves wishing for so much more together, but she has a decision to make… and it feels like either way she loses something (her freedom or her heart).

I was so wrapped up in Her Texas Cowboy.  I like these characters, they have flaws but they are believable given their situations.  Lucienne and Brock just work as a couple, opposites in many ways but on the same wavelength in important ways.  We’ll encounter old book friends, get a bit deeper into the Paxton family dynamics, deal with danger, tackle a bunch of lies, and eventually, bring Brock’s and Lucienne’s happy ending into view.  I’m enjoying the Blackstone Ranch series, frankly, I am itching to continue with the next story due out in March of 2021.  If you love a good, solid romance with some conflict, a bit of mystery, and a couple that belongs together then you’ll feel right at home here.

Available for your favorite e-reader,  mine is the Kindle