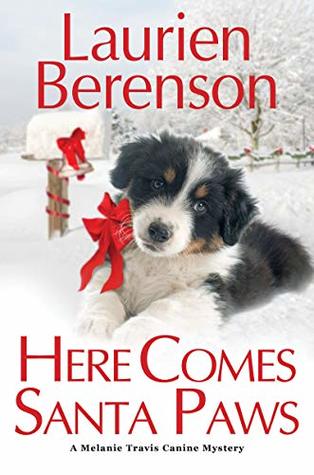 I confess I am very late in coming to the A Melanie Travis Canine Mystery series.  To be frank, if I’d paid better attention I’m not sure that I would have requested an ARC of the 24th title in a series.  And to be further frank – I’m really glad that I made that oversight for I discovered a story that had me engaged with the mystery, enjoying the antics of the characters and not the least bit lost in a story that could be considered a standalone.  I have had the pleasure of enjoying a few series like this where you have a base set of recurring characters but each book is a new adventure.  Now, I intend to go back and read the very first book, UNDERDOG, to see where this all began from — but you could (like I did) pick up HERE COMES SANTA PAWS and completely enjoy the relationships, the mystery-solving without any hesitation.

I was easily caught up in HERE COMES SANTA PAWS from the very start.  Really, most of what you need to know before picking up this book can be found in the Cover Description.  What I discovered was a mystery that kept me guessing, an amazing relationship between Melanie and her Aunt Peg, and a bookful of adorable dogs, pups included.  I had fun in this world, and that is the entire point of any story.

I wish I had discovered this series sooner, but I do intend to continue from this point onwards.  If you enjoy a really good Cozy Mystery, if putting puzzle pieces together until they show the entire picture is your thing, or if you simply like stories with interesting, realistic relationships in the background then you’ll want to pick up HERE COMES SANTA PAWS and discovery an enticing world full of mystery for yourself.  I’m hooked now on this series, and I believe you would be, too (if you aren’t already).

Available in hardcover and for the Kindle