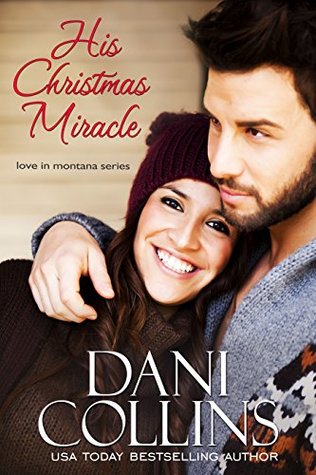 Quincy Ryan was just handed custody of a son he didn’t know existed. He knows how to be an architect, not a dad, so he looks to his own father for guidance, but that means moving with Pops to Marietta, Montana. Quincy knows he has to get over his shock and give Atlas the Christmas he deserves, but how? He needs a miracle.

Nicki Darren, failed actress, will take any job as Christmas approaches, even babysitting for a withdrawn, workaholic, single father. She lost her mom as a child, too, and hasn’t had a real Christmas since, so she identifies with four-year-old Atlas.

An advent calendar of activities soon has Nicki pulling Quincy out of the house to get a tree and ice skate with his son. She wants Quincy to open his heart to Atlas, but begins to fall for the Ryan men herself. It makes the countdown to her last day, Christmas Eve, bittersweet. If only the miracle he is looking for included her…

Titles in this series include:  Hometown Hero, Blame The Mistletoe, The Bachelor’s Baby, His Blushing Bride, His Christmas Miracle

Read on for my thoughts on His Christmas Miracle.  No true spoilers,promise.

Nicki was returning to Montana after finally trading in her dreams for reality.  It wasn’t that hard of a choice, really.  But the sting of not making her younger dreams come true hadn’t yet lost it’s bite entirely.  What she was doing now fit her personality, and she enjoyed her work in the medical field.  This short term job was perfect for what she needed now.  If she could calm her nerves and put those acting skills to work in showing a professional, confident face to her new employer.  Which was proving difficult as she faced the handsome, silent man filling the doorway.

To say that Quincy was shell shocked, out of his comfort zone and just a bit miffed would be an understatement.  In the space of a few short weeks he had discovered he had a child, that the woman he’d once been in a relationship with had, it seemed, planned to become pregnant despite his statement that he wanted no kids, his child’s mother had died leaving him with full custody of a child he didn’t know existed until recently and he’d moved across country with his father and son to the newly purchased home that had once belonged to his father.  Yeah. it was beyond a bit of a change for them all.

Now he was faced with allowing this beautiful, bubbly, chatty woman to care for his father and his son… what in the world had he gotten himself into?

His Christmas Miracle is such a loving, family romance.  Sound strange?  Not really.  This isn’t about a man and a woman falling in love.  This story is all about falling in love with a family.  Father and son.  Man and woman.  Woman and child.  Family love.  The men of the Ryan family need the special touch of Nicki and each responds to her inclusion in their lives differently, but every guy loves this woman, simply as different aspects of their lives.  And none want her to ever leave them.

Nicki has the life she always wanted right in this house.  She also has the chance that she never believed she’d ever get to fulfill her dream.  The love of one silent, gruff and changing man will make that decision for her.  And what a loving couple they make.  This one had me in tears, both the sad, the wishful and the happy tears that only a really good story that touches the heart can produce.  I absolutely loved this couple and their romance.  It’s a story that I know I’ll be re-reading for many Christmas seasons to come.

If you’re ready to have your heart stolen by an adorable child who already has found his true love, and you’re looking for a really feel good Christmas romance then His Christmas Miracle is exactly what you need to pick up this holiday as a treat for yourself.  I would highly recommend any story in this series, but especially this story.  It will melt your heart and have you believing in some Christmas miracles as well.