His Family of Convenience by Amy Ayers 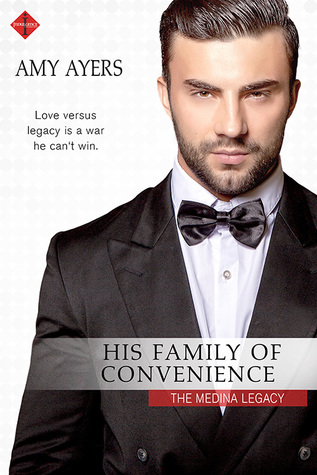 Senna Callas’s one-night stand with her alpha asshole boss, Marco Medina, was supposed to mark the end of her internship and their ridiculous attraction. After being unreachable and ignoring Senna for a year, Marco sweeps back into the country and summons her to his office, revealing he knows her secret…the secret created during their explosive night together.

Marco is determined to be there for the son he’s just discovered he has, but when it comes to being with Senna, his choices aren’t his own. His meddling family expects him, the firstborn son, to follow through with the arranged marriage set up when he was a child. And Senna has no plans on being his mistress and still resents how her attempts to contact Marco were ignored. The only thing going right between them is the attraction that burns no matter the complicated situation they’re in.

Marco would do anything to protect his family, anything except decide between the legacy he was born into and the young family he’s just found…

Titles in The Medina Legacy series include:  His Family of Convenience –

His Family of Convenience is an intriguing romance between two people with an intense passionate nature who give in to one night – and, of course, that night has consequences.  Marco and Senna are opposites in some ways, but stubbornness is not one of them.  Senna tried to contact Marco, she never intended to keep anything from him, yet she was blocked by his family and the woman he was to marry in a merger styled arranged marriage.  It’s easy to push off the inconvenient things of life when you have power, money and a strong family backing you.  Senna had none of those things, so she did the best she could under the circumstances.  When Marco finally discovers that he has a son, his way of setting everything straight couldn’t have more unnecessary twists and turns.  He has to make a choice, one that should be easy yet it somehow isn’t… and that is where he just might lose everything precious to him in this world.

I enjoyed this romance.  Although I have to be frank and say that Marco won absolutely no points with me.  I wanted to like him, and in some ways I did but I couldn’t love the guy.  Maybe it’s because I never had power and money behind my name to give me a different sense of the world.  Yes, he makes his stand, but it’s at a price.  Senna, I loved.  She’s stubborn, determined and has a mind of her own.  Yeah, life didn’t work out the way she’d planned but that doesn’t mean in cannot be a good life.  The nastiness she had to endure from Marco’s family just grated on me.  Power is everything to some people.  There is definitely enough teasing about some characters to make me interested in the next book in this series to see how things play out.

If you are a Romance reader who loves plots and nasty plans, stubborn people and the love of that one person who can change everything – then His Family of Convenience is exactly what you’d enjoy.  I’d recommend this one, and I’m looking forward to the nest story.

Tell Me No Secrets by Lynda Stacey

Tell Me No Secrets by Lynda Stacey