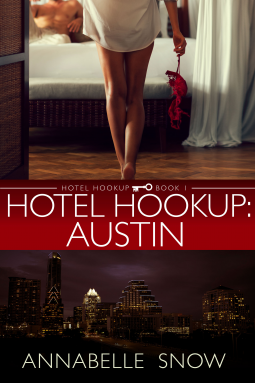 Bridesmaid Amaree Lowell attends her long-time friend Whitney’s engagement luncheon in downtown Austin to celebrate and help plan the wedding. Little does Amaree know, she is about to be paired with groomsman Evan, her former high school boyfriend whom she hasn’t seen in eight years.

The chemistry still sizzles, with eight years only adding to Amaree’s curves and Evan’s sexual swagger. So when he invites her back to his room after the luncheon, she can’t wait. The tryst eight years in the making may start with a slow burn behind closed doors, but it soon explodes as clothes are shed and boundaries are pushed.

With the wedding approaching and more events on the horizon, Amaree and Evan know they will be spending more time together. Will their chemistry flame out or will their passionate lust turn into more

This series is Erotica and has strong sexual content.  18+ readers

The Hotel Hookup series has one thread woven throughout all the stories, the wedding of a mutual friend, Whitney.  The first couple’s story is short and extremely hot and sexy – Amaree and Evan were high school sweethearts who parted ways on friendly terms to head off to different colleges and haven’t been in contact for about eight years.  Both are in the wedding party and have been re-paired up by the bride and groom.

I liked this couple and found Evan endearing with his slightly nervous moments.  Because this is a former couple, there really sin’t much character fleshing out since they already know each other and are now getting to know the mature people they’ve grown into since they last saw each other.

You can expect some finely detailed, super hot and steamy sex between Evan and Amaree.  While there is an indication that they may be reconnecting later on… for now we are left with a happy for now ending.

I enjoyed Hotel Hookup: Austin for exactly what it is, a short, sexy beginning to a super sexy series.  I’m looking forward to traveling to San Francisco for our next couple in this series.  It’s fun, sexy and just enough of a second chance romance to keep hopes high for their happy ever after.