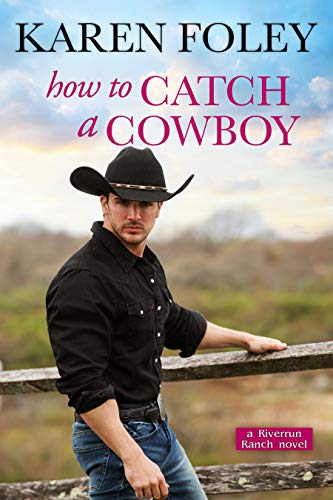 I’ve been waiting for Holt’s story and ‘How to Catch a Cowboy‘, the third title in the ‘Riverrun Ranch‘ series certainly delivered everything I’d hoped for and more.

Holt was burned badly by his ex-wife, a gold-digging witch who saw dollar signs, not true love when she cut herself loose from their marriage – taking as much as she possibly could from Holt, including his desire to ever trust in love again.  The experience has shaped Holt into the loner that he is today not ever wanting to put his trust or his emotions on the line for any woman… ever.  Jessie will change that, oh, it will take some time, a lot of stubbornness on both sides, but this cowboy is about to learn that not all women are like his ex-wife – sometimes you do indeed find pearls among the swine.

Jessie has had a crush on, been half in love with Holt for, well, it seems forever but she’s never acted on those feelings until now.  When her grandmother retires and asks Jessie to step up as at least a temporary housekeeper at the ranch Jessie will hesitate and then dive right in for helping her grandmother comes first but close behind is the chance to be around Holt and maybe change how he sees her.  The road to a happy ending is going to be full of potholes and a very stubborn cowboy, but Jessie can be equally stubborn, especially when she sees that Holt isn’t as indifferent to her as he might like to let on.

I adored Holt and Jessie together in ‘How to Catch a Cowboy‘.  They are real, with emotions, reactions, stubbornness, and caring.  Watching them, especially Holt, open themselves up to the possibility of a lifelong love was such an emotional, enjoyable journey.  The secondary romance a bit in the background was delightful and I’ll admit to smiling quite a bit through that romance as well.  I had a blast back in this world – and if you love a good romance full of real, believable people then you’d enjoy this entire series, but especially Jessie and Holt’s story.