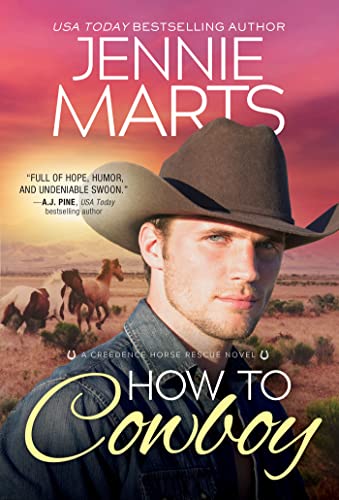 How do you heal a broken heart?

After one injury too many, Cade Callahan gave up the rodeo for a simpler life working at his cousin’s horse rescue ranch. But his life turns upside down when his estranged daughter is placed in his custody after a tragic car accident. Wanting nothing to do with her father, thirteen-year-old Allie struggles to adjust to her new life.

Newly single and living out of her mother’s basement, physical therapist Nora Fisher doesn’t think twice about taking a job as a traveling therapist for Cade’s daughter. The trouble is, she doesn’t know anything about horses, or hunky cowboys. Now both in way over their heads, can Cade and Nora find a way to help Allie, and trust in the attraction building between them?

How to Cowboy is the third title in the Creedence Horse Rescue series, and it brings us such an emotionally gripping romance between an unlikely couple trying to help a young pre-teen whose entire world has just imploded.

Cade suddenly finds himself back in his pre-teenage daughter’s life when she is injured in the car crash that killed her mother.  Allie has been told a lot of things about her absent father during her life, little of it actually true.  When Allie was tiny, Cade made a mistake, one his ex-wife never let him forget and after their divorce kept him out of his daughter’s life by refusing to allow him to see Allie or by moving constantly so that he has no idea where they are.  He could have fought harder, and he admits that, but guilt let him believe all the lies his ex-wife was saying about him and he didn’t want to disrupt his daughter’s life.  Now they have to somehow come together as a family as Allie heals physically and emotionally… and for that Cade’s going to need professional help like Nora.

Nora has just come out of a bad breakup, is living in her mother’s basement, and desperately needs a job and a new direction.  As a traveling physical therapist, she’s perfect for the job of tending to Allie’s physical needs, and her emotional ones as well.  She didn’t count on an intense, instant attraction to Cade but this job and these people could change her life… if she’s willing to take a few risks in trusting her heart.  We’ll also run into some familiar faces, citizens of this small town… and the most adorable, cantankerous animals imaginable on the ranch.  I love returning to the Creedence Horse Rescue world.

How to Cowboy was a fun, emotional, sexy romance with each of the three main characters having some serious issues to be dealt with… Allie in particular.  How do you reach a young girl who feels abandoned by her father, was lied to for years, and has lost her security of her mother?  Not by calling her dead mother a liar that’s for sure.  I loved how Cade stepped up into his father role, faced the past, and worked to earn his daughter’s trust and eventual love.  Nora had a lot to do with that happening, and their relationship was a bumpy road to the happy ending they both deserved.  I enjoyed returning to this world, the story is smooth and well-written, the plot interesting, the secondary characters make the world come alive, and the animals are always good for some adorable and mischievious moments.  If you enjoy a good story, believable characters and unique situations then this one should be on your need-to-read list.