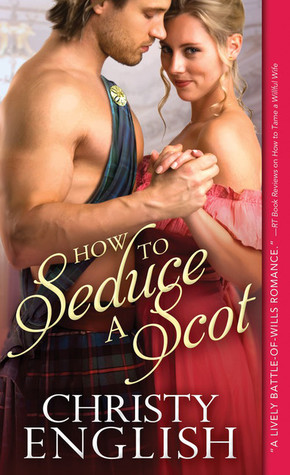 The plan is simple:
1. Descend from the Highlands to face the aggravation of a London Season;
2. Foist his wild sister off on some gullible English lord;
3. Retreat before the ladies of the scandalized ton can get any ideas.

Determined to see his hellion of a sister wed, Highlander Alexander Waters is willing to face anything—even the English. He just didn’t expect his own rough manners to cause such a riot…or for a blooming English rose to catch his eye.

Gently bred Catherine Middlebrook must find a respectable man to marry or her family will be ruined. She won’t allow herself to be distracted by Highland barbarians…no matter how her body may thrill whenever Alex is near.

Catherine wasn’t part of the plan, but as their battle of wills escalates, Alex comes to realize this “proper” English girl is as wild as the Highlands themselves…and nothing will stop him from having her.

Read on for my thoughts on How To Seduce A Scot.  No true spoilers, promise.

Alex Walters is on a mission, a dangerous mission one that will take all of his strength and intelligence to pull off.  He’s out to get his younger sister married off to an Englishman as quickly as possible and make it out of London before he does something stupid – like fall in love with an angel.

Catherine Middlebrook has a mission of her own.  To find and marry a very wealthy, titled Englishman.  After her father’s recent death, her mother is still spending money like it will miraculously reappear in their coffers overnight delivered by fairies.  Unfortunately, in order to save her mother, sister and herself from debtors prison or the streets, Catherine must marry well and quickly – and she has only one Season to accomplish all of this before her world falls apart.

As Catherine befriends Alex’s sister, she comes into his orbit and while neither likes it or will admit to it, the sparks start to quickly fly – emotional, physical and definitely verbal.  One big, brawny and stubborn Highlander caught up in the spell of an innocent, delightful English miss.  Exactly what Alex never intended to happen on this trip.  He intends to return home to Scotland and put out to sea on his own ship, not become besotted after a woman who is as exciting to verbally spar with as she is to imagine in his bed.

How To Seduce A Scot is a highly amusing (to me at least), charming story of truly opposites attracting in a rush of instant lust on both sides, although Catherine might call it something else.  The romance that develops is of a slow burn as each one becomes aware of just how much they want to be with each other even though neither one wants to admit to that need.  Alex will have to act quickly when Catherine decides upon a Lord who might fit the bill that she needs to fill.  There is no way that he’s willing to let her go, but can he see a different life than the one he has mapped out for himself?

I enjoyed this first story in the Broadswords and Ballrooms series, and after meeting the secondary characters, who at times took the attention away from Alex and Catherine, I’m imagining that this series can only get better from here.  If you love Highlanders, enjoy seeing a stubborn, sexy alpha male brought to his knees by a Lady then How To Seduce A Scot is a book that you will want to pick up now, or at least add to your to be read list.  It’s that good.

Oh, by the way, has anyone else noticed how the lovely lady on the cover seems to be looking right into your eyes with a self satisfied smirk thinking “Just look at what’s mine!”.  Yeah, me too.  *grin*

*I received an e-ARC of How To Seduce A Scot from the publisher and NetGalley in exchange for an honest review. That does not change what I think of this novel.*

A Hero and a Gentleman by JoMarie DeGioia

A Hero and a Gentleman by JoMarie DeGioia