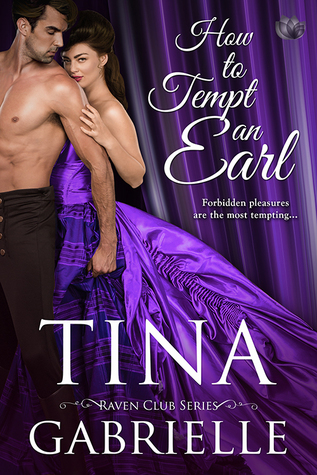 London society is cruel for a young woman whose father is an avid gambler. Miss Grace Ashton is not one to stand idly by while her family becomes destitute. Donning a mask, she slips into the night and attends the infamous Raven Club to confront the proprietor. But nothing prepares her for the sinfully attractive and wealthy Ian Swift.

Ian is intrigued when Grace walks into his gambling club but refuses her offer of a few jewels to pay her father’s large debts. Unbeknownst to anyone, Ian has inherited the Earldom of Castleton, and he must reluctantly take his place in Society. But Ian’s manners as a gentleman have suffered. He needs a tutor, and he knows the exquisite lady standing before him is the answer.

But soon tutoring turns to flirting, which unfortunately lands both of them in…marriage?

Titles in the Raven Club series include:  How To Tempt An Earl –

Grace is desperate to stop her father from gambling their family into total ruin – and desperate times will always require desperate actions, like donning a mask and entering a gambling den to plead with the owner.  As the second son, Ian has done as he pleases with his life, and the Raven Club fits his lifestyle perfectly… or it did until his elder brother’s death.  Which put Ian right back into a role he never wanted, never dreamed he’d have to fulfill and certainly wasn’t looking forward to re-entering London’s High Society once again.  This beauty in front of him might just hold the answers for them both.  They each needed something from the other.  Her’s to cover her father’s gambling debts, his to be re-educated on the manners and attitude of a true gentleman of society, mostly that Ian has willingly forgotten over time.  The spark is there between them, they both would benefit… but neither ever dreamed it would end up like it did.

I enjoyed Ian and Grace in How To Tempt An Earl.  Sometimes couples surprise me, yet Grace and Ian did fit together so well.  Adjustments, of course. but they aren’t at totally opposites sides of the coin as they may seem.  Watching them slowly working their way toward doing something about that attraction was a fun journey.  I liked them and hopefully will run into this couple again in the Raven Club series, as secondary characters next time.  I enjoyed my time in this world and I’m going to keep an eye out for the next story in this series.  If you love a good Regency Romance with likable and believable characters then this is one book you’ll want to pick up.