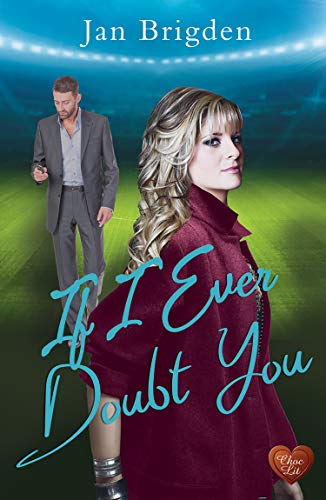 If I Ever Doubt You is the sequel to As Weekends Go and brings us further along in Rebecca’s and Alex’s whirlwind romance.  Rebecca has made her choice, and she chooses her own happiness with Alex without really understanding what she’s letting herself in for.  Her feelings for Alex don’t change, in fact, they deepen throughout the next chapter of their lives – but she hadn’t really considered the life she’d be living with a famous footballer or the environment she’d be stepping into sight unseen.  She’s in for some surprises with this move, both stunning and distressing as she takes a stand against being the outsider in a tight-knit group of mostly fake people, has to fight for time with Alex due to his schedule, deals with a vindictive ex-husband and worries about a stalker after Alex.  No one ever said that staying in love was going to be easy, now Rebecca has to make another choice – hunker down and fight for what she and Alex share together – or walk away, which is something she will not do, so tough it out, learn to navigate this world, and get on with building that life with the man she loves.

Since As Weekends Go came out several years ago, I don’t think it’s completely essential to have read where and how this couple met — Oh, I’d recommend it for it’s a tantalizing tale, but you could step into If I Ever Doubt You rather easily if that is your choice.

I was easily drawn back into this world and celebrated (and cringed) right along with Rebecca as the reality of the life she would live with Alex is becoming clear … and not always a pleasant experience.  There’s back-stabbing, jealousy (from several directions), possible danger in a stalker, and one man who just won’t let go.  But there is also laughter, settling in together, deepening the commitment they both made to each other – so, yeah, there are emotions galore in If I Ever Doubt You.  I had such fun with this couple, learned a few things, and got a backstage look at being famous (it doesn’t seem all that glamorous to me), and watched their love deepen in spite of the tests put to this couple throughout their story.  If you love a good romance that goes beyond that initial ‘happy ever after’ on to the real living with a new love, then you’ll want to pick this one up as soon as possible.

*I received an e-ARC of this novel from Choc Lit & Ruby Fiction. That does not change what I think of this story.  It is my choice to leave a review giving my personal opinion about this book.*