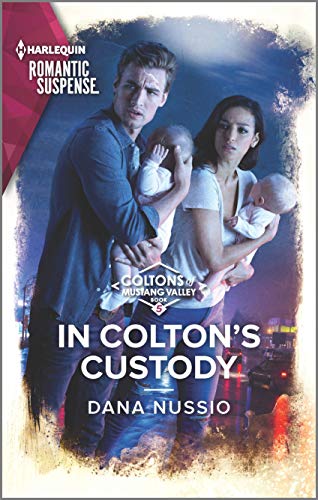 A Colton must solve a DNA mystery…

…and save his family from ruin.

One phone call suddenly upends Asher Colton’s life. He discovers his baby daughter might have been switched with single mom Willow Merrill’s.

Worse, the daycare owner vehemently hates his family. But for the babies’ sake, they work to uncover the truth about the births as threats to the Colton family—and Willow’s business—mount.

But can the truth set free a love-scarred rancher and his harshest enemy?

The intrigue, the unanswered questions, and the threats just keep escalating in the Coltons of Mustang Valley series as In Colton’s Custody brings us single-parents’ Willow and Asher’s romance – one that started through an anonymous tip that their babies, both born on the same day at the same hospital may have been switched.

Willow and her mother have a history of anger and hatred toward the Coltons.  Finding out that it is a Colton baby that may have been switched with her own is beyond belief, and with even more tensions added to her life since she’s already facing someone out to damage the reputation of her daycare business (and as a result, her own reputation as well).  Willow is in no real emotional shape to deal with Asher Colton as he strides into this meeting at the hospital, but right now she has no choice even as her anger simmers beneath the surface.

Asher’s family is already facing trauma.  His father’s been shot, is still hospitalized in a coma, one of his brothers really isn’t a Colton and was actually switched at birth, threats abound all around his family and even from within with former family members… and now someone is making anonymous accusations that his sweet daughter really isn’t his?  No, this madness has to stop.  He didn’t expect to like Willow or to really care about her feelings in all of this but it doesn’t take long before they are feeling an attraction between them that shouldn’t exist.  With his life turned upside down is now a realistic time to fall in love with a woman who already dislikes his entire family?  No, but then emotions don’t really listen to logic.

I believe that In Colton’s Custody is the best of this series so far.  The intensity of the story, the unseen villain pulling strings behind the scenes, not knowing if it’s the same person that’s after the Colton family or not, the hate turning into love that Willow is feeling, the vulnerability of Asher, all of that combined give a damn good story that had me glued to my Kindle throughout.  If you enjoy a suspenseful, action-filled Romantic Suspense, then Asher and Willow’s story will certainly deliver that.

Available in a paperback and e-books