In Her Sights by Katie Ruggle 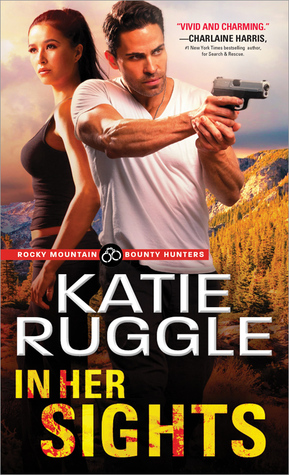 Bounty hunter Molly Pax fought hard for everything she has, turning the bail recovery business she shares with her sisters into an unqualified success. So when their sticky-fingered mother jumps bail and puts the childhood home up as collateral, Molly’s horrified. To make matters worse, every two-bit criminal in the Rockies now sees her family’s misfortune as their next big break.

Enter rival bounty hunter John Carmondy: six feet of pure trouble, with a cocky grin to match. John’s the most cheerfully, annoyingly gorgeous frenemy Molly’s ever had the pleasure of defeating…and he may be her only hope of making it out of this mess alive.

I have to admit, up front, that I love a clueless partner within the main couple of any story – genre doesn’t matter.  It’s that bold as a tree that stepped out in the road in front of your car reaction that eventually happens that makes me either smile or laugh out loud.  There’s a lot within IN HER SIGHTS that made me laugh, and get annoyed, and angry and completely lost in this opening story in the new series about five bounty hunter sisters, their criminal mother and the bad guys they encounter.

Now, I’m not going to sugarcoat it, some readers are going to go ballistic when they realize that not every story in the series is completely neatly wrapped up by the ending.  There are threads woven in this opening story that will, most likely, continue until the final story.  Each story has its ending, but the arc continues so don’t be surprised if you don’t know everything you wanted to know by the ending.  For me, that just makes the series more realistic and I’m more inclined to stick with it to know what finally happens… but that’s me.

IN HER SIGHTS gives us Molly Pax and John Carmondy as the main couple… and Molly as the totally clueless lady who really believes that John just shows up on her cases to annoy her, even when his help was greatly needed.  She doesn’t see his attraction for her… but is definitely fighting her attraction to him with the resulting snarky comments she tosses around with ease.  Watching Molly need to lean on John for his help and maybe begin to deal with those pesky attraction feelings flowing between them like lava… finally, was pure entertainment and a bit of satisfaction as well.  I liked this couple, they’re both good at their jobs, feel strongly and when they open up to each other they discover a whole new world.

I frankly loathed Molly’s mother.  She’s a criminal who never learns a lesson.  It’s taken Molly and her sisters years to pay off the mortgage on their home.  They’ve opened up the bounty hunting business with each woman dealing with the cases that fit her own unique personality.  They’re finally seeing success… until her mother illegally used their home as collateral for bond and then jumped.  Now, if the sisters don’t bring in their mother as a bond jumper they will lose their home.  Mommy Dearest Of The Worst Kind.

I enjoyed IN HER SIGHTS so very much.  I was fully engaged in this story from the start, found the characters to be interesting and started forming a bond with them, loathed the obvious villainess and found plenty more bad guys to despise as well.  The threads will keep me watching the next stories as that thread and new adventures come along.  I can’t wait.  If you love a good solid Romantic Suspense story that is engaging, humorous, intriguing and will keep your attention then you’ll want to check out IN HER SIGHTS.  I’d not hesitate to recommend this one at all.

The Trouble with Cowboys by Victoria James

Meet Me at the Art Cafe by Sue McDonagh

The Trouble with Cowboys by Victoria James

Meet Me at the Art Cafe by Sue McDonagh