In Love on Anchor Island by Terri Osburn 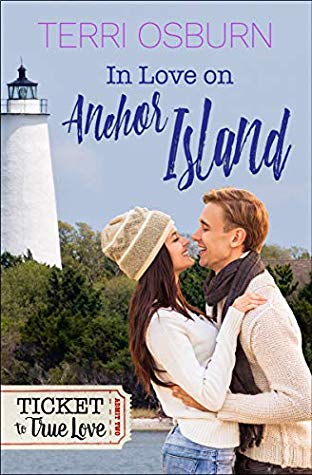 Roxie Chandler is a screw-up. She doesn’t look for trouble, but it finds her anyway. After creating a scandal in her hometown, she takes refuge on Anchor Island, her cousin’s adopted home in the Outer Banks of North Carolina. Planning to stick around only until she finds an alternative, Roxie doesn’t expect to make friends. Or to find love.

Alex Fielding is living his dream. A small-town doctor making a difference in his neighbors’ lives, he ignores his father’s demands to return to the big city and take his rightful place in the family practice. His life on Anchor Island is quiet and simple, just how he likes it until a leather-clad rebel with a chip on her shoulder moves in next door.

Roxie and Alex get off to a rough start, but sparks fly even when they’re fighting. The more he learns about her, the more Alex wants to save her from herself. And the longer she’s on the island, the more Roxie thinks about staying. But when her prediction comes true and she screws up once again, Anchor Island may no longer be her port in the storm.

(I have read and enjoyed this series, yet the reviews of the earlier books were posted on a website of mine that no longer exists and I didn’t bring all of those reviews over to KB, unfortunately.)

It was such a joy to return to Anchor Island once again to catch up with beloved characters and see where they are now – and to be introduced to Roxie and Alex, a couple who will win your heart even when you think they are just too opposite to co-exist let alone fall in love… but, you’ll see what I mean.

In Love on Anchor Island brings Roxie to the island to help her cousin with the aftermath cleanup work from one nasty hurricane’s attack.  Roxie has made some questionable decisions and brought down the anger and hurt of her family to the point where she’s basically on her own now.  Coming to Anchor Island is kind of a second chance to get her life right, even if she complains about it loud and strong on the ferry trip over – and her disparaging remarks were overheard by the island’s doctor, Alex.  Not the best first impression by a long shot.

Alex has found his place, his home, exactly where he wants and needs to be on this island and is in an ongoing battle of words and emotions with his father about coming home to work in the family practice.  So, overhearing Roxie’s opinions about his adopted new home formed his impression of this stranger and Roxie didn’t do much to change that opinion by her actions.  Yet, there is a spark of attraction there that both will fight long and hard to ignore – until that becomes impossible.

Watching Alex and Roxie work through that first impression, getting to catch up with characters that I’ve loved in previous books, and seeing two deserving people get a second chance at not only life but at love was an enjoyable, emotional journey.  I had such a good time with In Love on Anchor Island and would not hesitate to recommend it, or the earlier books, to any reader who loves a good romance, likable characters and a story that will touch your heart.

I own a Kindle edition of In Love on Anchor Island.